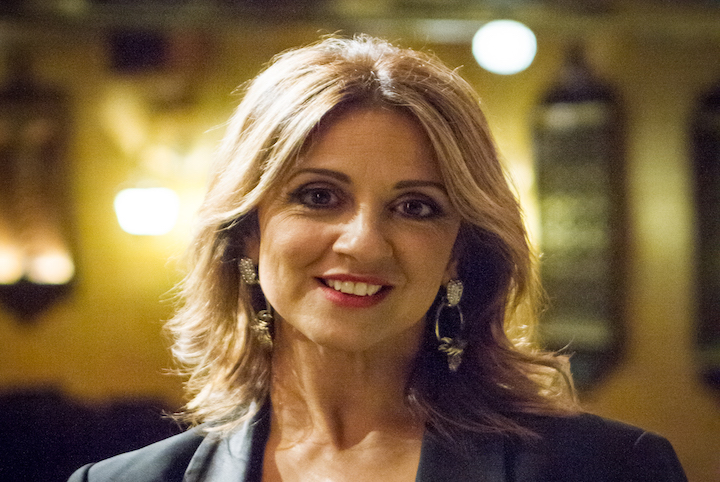 Australian musical theatre icon Silvie Paladino will star in the Newcastle production of Chess at the Civic Theatre this month, Picture: Supplied.

For Silvie Paladino, it’s the emotion that comes with belting out a torch song that has kept her treading the musical theatre boards for the last three decades.

“I just love the marriage between story and song. I love that, for a moment, you are able to take people out of their situation whatever that may be and take them on a journey with you,” Silvie told Newcastle Live.

“I love the emotion. I’m drawn to high emotive dramas. I just love to be able to throw myself into a character that allows me to really express myself.”

Silvie will have ample opportunity to do just that when she steps on the Civic Theatre stage next week in the Very Popular Theatre Company’s production of Chess The Musical.

It tells the story of two of the world’s greatest chess masters – one American (Worrall), one Russian (Harris) who are caught up in a Cold War-era tournament as well as a love triangle when Hungarian refugee Florence Vassey (Paladino) enters the picture.

“It’s a hard show to describe,” Silvie said. “It’s not really about a chess game, it’s about a love triangle that is based around a game of chess between the Russians and the Americans. There’s lots of suspense and intrigue and love and passion.”

While Chess did not ‘set the world on fire’ when it premiered on London’s West End in 1986, it’s status as an important musical theatre work only increases as the years roll on – something that Silvie said was due to those glorious songs such as the touchstone hits I Know Him So Well and One Night In Bangkok.

“There was criticism in the beginning that the book was somewhat flawed but when you ad the music it is just extraordinary. I mean Benny and Bjorn, just ABBA in general, have written some of the catchiest songs of all time.

People will be amazed at how many songs they actually do know from the show – even if they’re not musical theatre types.

“People will be amazed at how many songs they actually do know from the show – even if they’re not musical theatre types. When my kids heard One Night In Bangkok on the radio they were like: “oh what a great song.” I said: “you know it’s from a musical,” and they were like: “no it’s not.”

The Newcastle production will be the second time Sylvie has taken on the role of Florence, taking on the role for Melbourne’s The Production Company in 2012 – a turn that nabbed her a Helpmann Award nomination for Best Female Actor in a Musical.

The Benny and Bjorn connection doesn’t end there for Sylvie either, having toured Australia and Asia in Mamma Mia which she described as a “phenomenal experience”

While she may’ve had designs on a career as a contemporary singer, after snagging the plum role of Eponine in Les Misérables ( a role that garnered her a Green Room Award nomination for Best Actress in a Supporting Role, and one that she reprised on London’s West End) her passion for theatre was ignited.

“I never dreamed I would do theatre – I wanted to be a contemporary singer when I started out,” Sylvie said.

“Les Misérables was my first show – I played Eponine and to experience the theatre like that was just absolutely addictive. I took to it like a duck to water.”

Chess The Musical is on at the Civic Theatre on Friday 27 March (8pm) and Saturday 28 March (2pm and 8pm). Get your tickets here.

ALSO ON NEWCASTLE LIVE
GIRLS TO THE FRONT: The foundations are strong for this HerCastle!
NOODLE FIX: Our tips for the best bowls in Newcastle!
SWEET SURRENDER: Wet Wet Wet will bring the love to Newcastle this May
SAVE THE DATE: YouTube sensation Nat’s What I Reckon is heading our way…and it’s totally on purpose