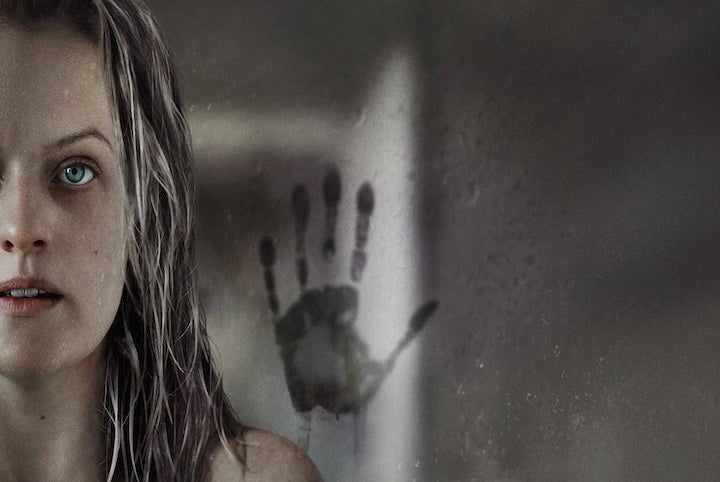 In The Invisible Man, Cecilia (Moss) is the abused wife of tech genius Adrian Griffin (Jackson-Cohen). After a daring midnight escape, eerily reminiscent of the 1991 Julia Roberts movie Sleeping with the Enemy, she hides out with the cop friend of her sister Emily (Dyer).

As you’d expect, she remains terrified and refuses to step outside the home of James (Hodge) and Sydney (Reid), the father and daughter duo who are keeping Cecilia safe from her husband.

She receives words that her husband has taken his own life and left her a fortune. She is suspicious and cautious but finally relaxes into her new life, free from the constraints and demands of her abusive ex.

Then things starts to get weird.

She senses she is being watched. She knows someone has been in her room and touching her things. Her sister and friends reassure her she’s safe, Adrian is dead, but she just can’t shake the feeling.

Soon enough, as she stands outside one night looking into the cold darkness, the audience catches glimpse of a breath of warm air through the chill.

Now we know she’s telling the truth. She just has to convince her sister, friends and the police.

Within the first few minutes of this latest reimagining of the 1897 H.G. Wells novel of the same name, Aussie writer and director Leigh Whannell manages to play on the fear of many modern women.

The fear of being stalked. Of being watched. And having nobody believe you.

This new movie also relies heavily on ‘gaslighting’. The term gaslighting is derived from the 1944 movie Gaslight (currently screening on Foxtel) when a husband tries to convince his wife she’s going mad by manipulating her and the truth. If you haven’t seen it, you really should. It’s an absolute mindf***.

The first half of The Invisible Man is pure psychological thriller. You’re really on the edge of your seat as the insanely talented Ms Moss creeps around the house, on guard against an enemy she cannot see but she senses with every fibre of her being.

It’s all very creepy, unsettling and my nerves were seriously on edge.

Then just as quickly, it changed into a pretty average thriller. I don’t quite understand what happened but….yeah. The movie then stabbed, shot and punched it’s way to a finale which was also a bit of a letdown.

Did the writer just run out of steam? Did his team disband? I mean, the movie ended okay, but it didn’t deliver what it originally promised.

It’s absolutely worth a watch and contains a slew of Aussie talent but proceed with caution. The movie you think you’re watching in the opening 30 minutes is not the movie you end up viewing. If that makes sense. Go in with an open mind and don’t expect too much.

ALSO ON NEWCASTLE LIVE
SAVE THE DATE: On-point satirist Friendlyjordies is back for THREE Newcastle shows
FITNESS GOALS: It’s time to EXPRESS YOURSELF this International Women’s Day
SAVE THE DATE: The Rubens bring massive Live In Life tour to Newcastle
SUGAR HIGH: Wallsend’s The Flossery spins the sweetest of tales