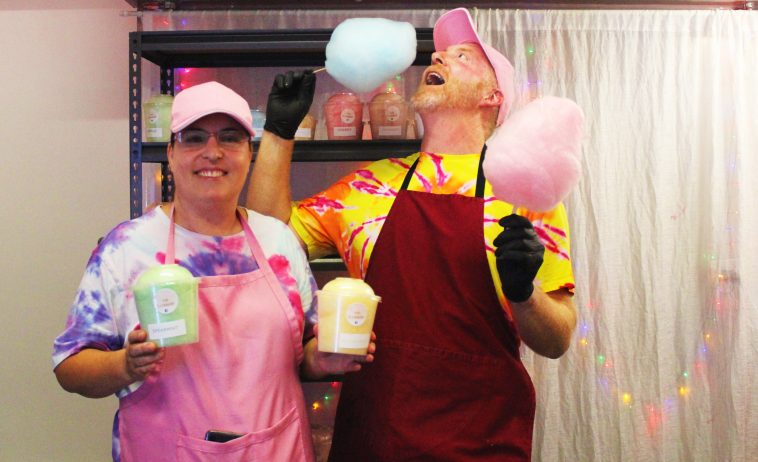 For Judith and David Kotz, owners of Wallsend-based confectioner The Flossery, it’s the sweet things that make life worth living.

The pair are causing quite a stir from their Robert Street premises, serving up a dizzying array of hand-spun gourmet fairy floss.

Having only been opened since January this year after testing the waters online, Judith said she had been overwhelmed by the level of support and the desire of people, far and wide, to sink their teeth into some pillowy sweet goodness.

“The response has been fantastic, ” Judith explained.

“On our fourth day of being opened, it was a Friday night and all of a sudden we were swamped and absolutely flat out until we closed at 9pm.

“The next day we opened and they were lined up down the street and by the afternoon we had sold out.”

This is not your normal run-of-the-mill fairy floss, either. At The Flossery, you have a whopping 28 flavours to tempt your sweet tooth.

From the standard ‘fairy floss’ flavour and the likes of musk, cherry and bubblegum to Devonshire cream, rosewater, cinnamon and even butter popcorn David and Judith leave no stone unturned when it comes to bringing big flavours to their fairy floss.

“We’ve got all sorts of flavours – your lollies your fruit your creams there’s mild flavours for toddlers and kids and stronger flavours for the adults,” Judith said.

“The popular ones at the moment are bubblegum, unicorn and fairy floss for the kids and Devonshire cream, passionfruit, mango and cherry for the adults.

“If we can find the flavour, we will experiment with it.”

Although Judith did admit that there had been some flavour requests from customers that had proved a little too ‘far out’.

“We’ve had a couple of blokes come in and ask for beer fairy floss, but I don’t know if we’ll be doing that anytime soon,” Judith laughed.

The Flossery is located at 61 Robert Street, Wallsend and is open from 3pm to 8pm Wednesday to Sunday.