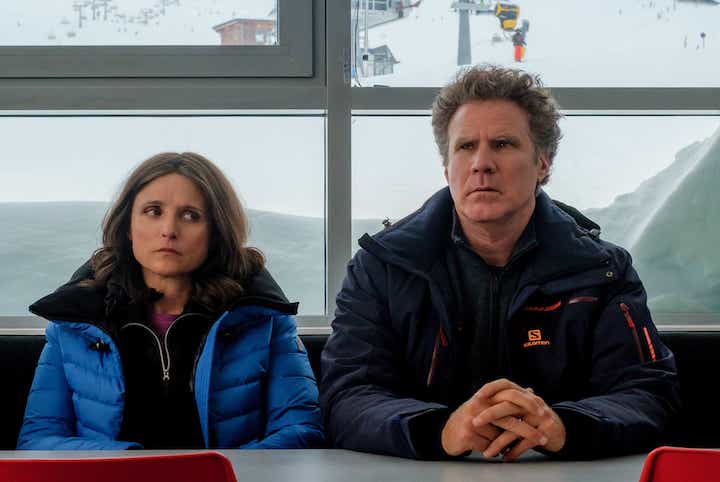 Force Majeure is also the name of the 2014 Swedish movie upon which Downhill is adapted.

In both movies, a man flees the scene of an avalanche, leaving his wife and two children to an unknown fate, possibly death.

As it turns out, the avalanche was planned and there was never any real threat. But in the eyes of his wife and children, he is a coward who left them to die. He tries to convince them otherwise.

But nope. He’s a coward.

What follows is an attempted exploration of a marriage that, like the avalanche, is potentially destructive, broken and not everything it seems.

No, give this one a miss. Go see The Invisible Man or Emma.

Or watch the Swedish original on Amazon. I saw it a few years ago on Foxtel and loved it.

Julia Louis-Dreyfus and Will Ferrell are both great actors, just not in this movie. Like the original, this should be a biting, complicated and very dark movie. But it misses the mark in so many ways.

There’s no real depth to the characters.

The movie itself runs at just over 80 minutes which is the length of a children’s cartoon movie these days.

There’s hardly enough time to establish anything at all about the family onscreen. As they’re holidaying at a posh ski resort, we can’t even take clues from their home, jobs or everyday lives.

The dialogue is stilted and just awful. It’s so bad I suspect it was simply copied and pasted from the original, fed into Google translate, printed out and handed to the actors.

Yep, it really was that bad.

But there are some bright spots.

Australia’s Miranda Otto is fabulous as the straight-talking Charlotte who is (I want to say) a hotel host who befriends Billie (Louis-Dreyfus). She pushes right into Billie’s life bringing an unexpected solace and permission to explore who she really might be.

Otto’s scenes are razor sharp and the reason I gave Downhill two stars.

The other half a star is because of Julia Louis-Dreyfus, whom I adore. And I couldn’t bear to not give her any stars, but the movie doesn’t deserve anything more than one half.

Ugh, it’s a disaster movie alright. Just not in the way it wants to be.

ALSO ON NEWCASTLE LIVE
REVIEW: Uneven Invisible Man remake still brings the creepiness
REVIEW: Jane Austen’s classic Emma shines again on the big screen
SPOILED FOR CHOICE: Newcastle turns it on for a BUMPER weekend of fun!
BLESSED: Here’s a few ways to fall back in love with Newcastle