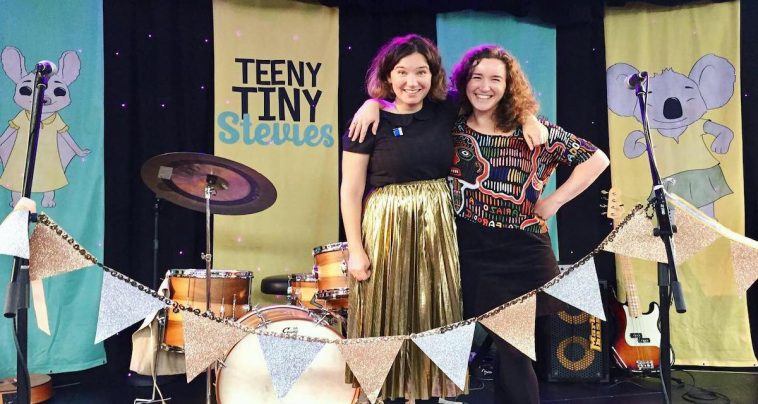 They’re the ARIA award-winning kids’ band that, while being Teeny Tiny, are leaving quite a large mark on the music world.

And The Teeny Tiny Stevies are hitting the road this September and October and will be stopping by Newcastle City Hall on Tuesday 21 September.

What started out as a ‘side-hustle for sisters Byll and Beth Stephen (who also play in the folk-pop outfit The Little Stevies) quickly exploded with their debut album Helpful Songs For Little People becoming a word-of-mouth sensation with parents across Australia.

Fast forward to 2020 and the pair released album number three Thoughtful Songs for Little People which took out top honours in the Best Children’s Album category at the 2020 ARIAs as well as snagging a Best Independent Children’s Album or EP nomination at the upcoming 2021 AIR Awards.

Showcasing the unique style in which these multi-talented sisters communicate with our littlest citizens, the album won the hearts and minds of parents and kids everywhere, thanks in no small part to some fantastic vids and no fooling earworms like Superpower, Had You To Teach Me and Good For Your Health.

With their second-ever national tour all set to be their biggest yet, culminating in four sold-out Sydney Opera House shows, cancelled due to the pandemic, there is certainly a sense of unfinished business with this national run.

“We’re so keen to travel beyond Melbourne with our bandmates and get back to work,” Beth said.

“It’ll be a huge thrill to play live music, not only in other cities but regional areas we haven’t been to in years. For an Australian, Ulladulla is the new South of France and I for one can’t wait to get amongst it.”

Catch the Teeny Tiny Stevies at Newcastle City Hall on Tuesday 21 September. Tickets are on sale from 11am on Thursday 1 July.