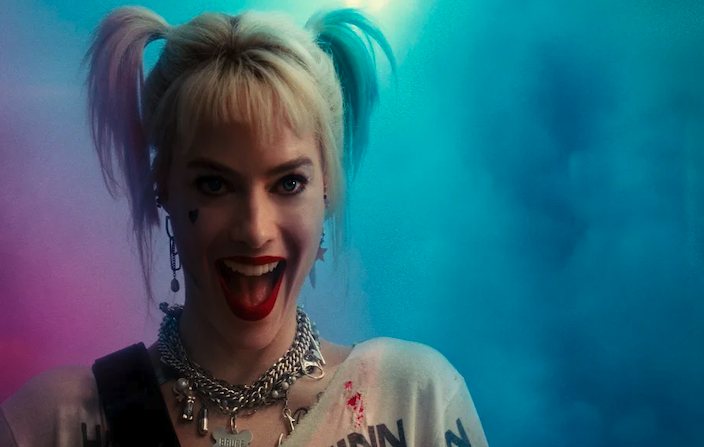 Birds of Prey: And the Fantabulous Emancipation of One Harley Quinn picks up not long after Harley Quinn (Robbie) has split with Joker.

And she’s not having a good time of it.

There’s tears, excessive consumption of alcohol, binge eating straight from tubs and canisters, acting out….basically, we’ve all been there and can relate.

Despite her broken heart, Harley realises she has to get her shit together because, as she’s no longer Joker’s girlfriend, she’s an unprotected target for the various Gotham City bad guys.

And after one giant and insanely cathartic f*** you to her ex, Harley’s back into the swing of things. Yeah, pun intended. Oh, and fear not my DC-loving friends, the disaster that was Jared Leto’s Joker doesn’t appear. Yay!

As Harley aimlessly shuffles through her new life, she happens upon some important information regarding a very special diamond. And this diamond is suddenly wanted by everyone due to some information coded into its sparkling depths.

Roman Sionis/Black Mask (McGregor) in particular, really wants this diamond and Harley uses this to her advantage. While we’re talking Roman, McGregor plays this character to camp perfection. Not over-the-top, but just enough.

As the title and trailer suggest, the hunt for this elusive diamond brings together a team of badass females. Nightclub singer Black Canary/Dinah Lance (Smollett-Bell), an assassin out for revenge Huntress/Helena Bertinelli (Winstead) and snubbed detective Renee Montaya (Perez).

And to outsmart the various bad guys, they have to work together.

Birds of Prey is as fun, outrageous, violent, gaudy, all female-empowering and kick-arse as you hope it will be.

The storytelling is entertaining and engaging with flashbacks never stomping all over the present-day narrative, as they are sometimes wont to do. There are a few slumps but, for the most part, the screenplay does a good job of tracking along at the promised frenetic pace.

Our main actresses are perfectly cast, and their on-screen chemistry is off the charts. When they all finally get together, that is.

Herein lies the biggest issue for this movie because it’s not until the final act that our Birds of Prey actually assemble as a team. Sure, everything is leading towards this and the stories and preceding scenes are engaging. But we’re all here to see a new breed of females come together to take on the bad guys.

And it just takes us so long to get to that point. Which is disappointing.

But overall, I really enjoyed watching Robbie take Harley into her new reality. She throws herself into the Harley role and the sheer physicality of her performance is worth the price of a movie ticket.

I’m keen to see if they do other Birds of Prey movie, hopefully with all these women reprising their roles. I just want them to let the girls have at it from the opening scene.

ALSO ON NEWCASTLE LIVE
Under The Southern Stars does its bit for bushfire relief
DESTINATION FLAVOUR: Celebrity chef Adam Liaw to tempt at Maitland Taste
SAVE THE DATE: Human Nature brings Good Good Life tour to Newcastle
Andy Golledge captures the magic of his live shows on debut EP Namoi