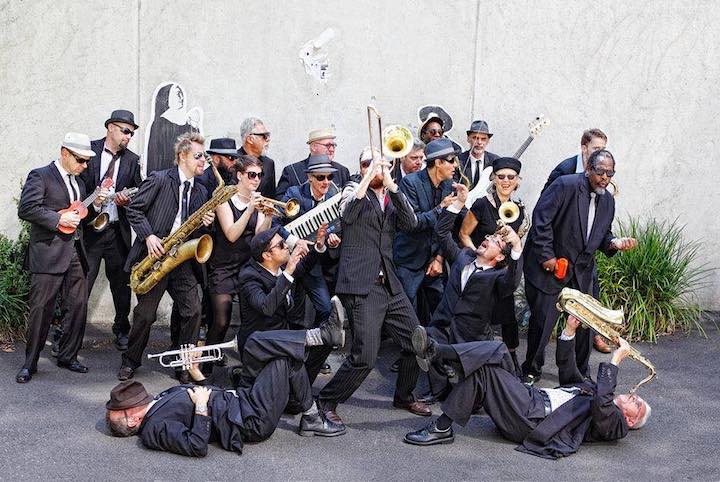 They are the upbeat ARIA award winners with a sound that is as big as the band itself.

And now the Melbourne Ska Orchestra are bringing their infectious grooves to The Cambridge on Thursday 12 March.

Led by the charismatic and uber-talented Nicky Bomba (John Butler Trio, Bomba, Bustamento) The Melbourne Ska Orchestra is still riding high on the back of their 2019 best world music album ARIA for the brilliant and weighty slab One Year Of Ska.

The album bore the fruits of a mammoth undertaking for the band which saw them record one new song every week for 12 months (phew!) and the latest single Good Days Bad Days a stellar testament to the band’s formidable talent and infectious energy.

For the uninitiated, this EPIC band, whose number can reach as many as 36 players, started life back in 2003 and has gone on to earn a reputation as one of the most solid acts on the circuit thanks to a formidable retinue of some of Australia’s finest players.

The band’s unique take on ska has wowed audiences all over the world. From Montreal to New York, Istanbul to London.

And when you are getting nods of approval from such greats of the genre as Stranger Cole, Owen Gray, Neville Staples, and Ranking Roger, you know you are on the right track!

It’s definitely a joyous experience when they take to the stage with Nicky Bomba saying that a Melbourne Ska Orchestra show is more than a mere ‘gig’.

“With so many band members, we’re a bit like a soccer team,” he said.

“Our live shows are a community experience. It’s imperative for us to make a solid unifying connection with our audience. We hold the live performance in high esteem, as it’s an ancient ritual where humans come together celebrating life through the wonder of music.

“It’s a bit of a spectacle to behold.”

Catch the Melbourne Ska Orchestra at the Cambridge Hotel on Thursday 12 March. Get your tickets here.

ALSO ON NEWCASTLE LIVE
CHECKMATE: Emotion runs high for Silvie Paladino in Newcastle production of Chess
GIRLS TO THE FRONT: The foundations are strong for this HerCastle!
Aboriginal ingenuity and culture celebrated at Newcastle Museum
NOODLE FIX: Our tips for the best bowls in Newcastle!