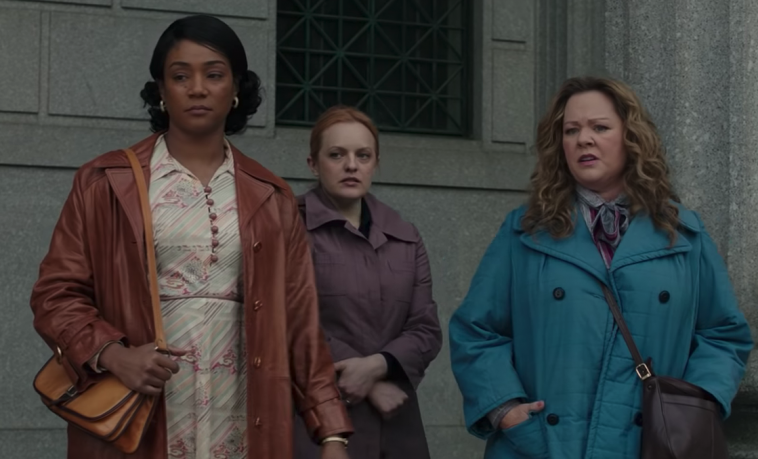 It’s 1978 in Hell’s Kitchen, New York and three gangsters have just been sent to prison for 3 years. Their wives, Kathy (McCarthy), Ruby (Haddish) and Claire (Moss) must now fend for themselves.

Offered very little support from their husband’s mob associates, and with no legal employment options available to them, the women take matters into their own hands and begin to not only run their husband’s illegal rackets but move higher up that criminal food chain.

With those three leading actresses, you’d think so, right?

Everything about the trailer, including The Rolling Stones Paint it Black thumping away in the background, suggests this is going to be a down and dirty crime drama starring not one, not two but three of the world’s most versatile and talented actresses.

McCarthy has been nominated for two Oscars. Moss is the lynchpin that has held together three seasons of The Handmaid’s Tale. And Haddish is an absolute force of nature who I was keen to see in a non-comedic role.

Oh, and the director, Andrea Berloff, was nominated for a writing Oscar for Straight Outta Compton.

This is gonna be an epic 5-star movie.

And to make matters worse, this movie is just plain and simply boring.

The sets, the costumes, the soundtrack, that ’70’s bad girl swagger, the cinematography are all 100 percent spot on.

But something went horribly wrong with the script. There are huge gaps and while these insanely talented women tried the best they could with what they had, even they couldn’t drag it out of the muck.

I also think there were direction issues. Moss, in particular, seemed a little lost at times, even though her character had the most I impressive character arc going from a beaten, miserable housewife to a stone-cold assassin who could carve up and dispose of a body without a moment’s compassion.

Based on the Vertigo comic book series from DC Entertainment, this story and these women deserved so much better. Haddish was very impressive but I always felt she was being directed to pull back. Her character should have been letting all hell break loose but nope, she was reigning it in.

I’m giving this a 1 1/2 star rating only because I think Haddish was really good, and because I got to see these 3 on the screen together. It was a crap movie, but I’ll give credit where credit due.

But you should go see something else. Go watch Once Upon a Time… in Hollywood again or check out some new stuff on Netflix.