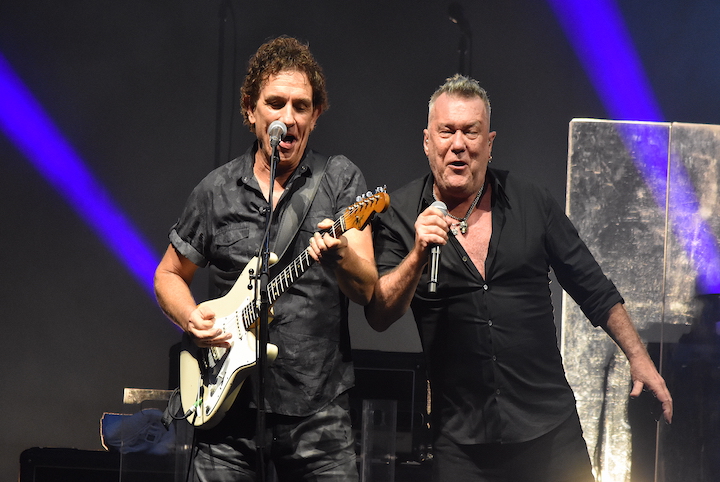 It’s late on a drizzly Saturday afternoon as we make our way up the Hunter Expressway to Hope Estate to see Cold Chisel, one of the most anticipated shows of 2020. Jimmy Barnes, Ian Moss and Don Walker, who are all still working successful solo careers, have gotten the band back together with long-time bass player Phil Small and drummer Charley Drayton to record a new album, Blood Moon, and hit the road for a tour of the same name. And we’re pumped for local instalment.

>> SKIP TO THE PHOTO GALLERY

Busby Marou are the first support act. They’re a great entree into the evening with songs that paint a picture of Australia and beautiful harmonies. Busby have been performing a similar style set as gig openers for a few years now, but when it goes down this well why would you change up the formula. They’re personable, loveable and skilful songwriters who obviously dig what they’re doing. There’s zero to complain about here, but if you really want to see  Busby Marou in full flight you should check out one of their own headline gigs.

Birds Of Tokyo are the next to hit the stage for the undercard. You can tell much of the audience have no idea who these guys are, but when they launch into mega-hit Plans early in the set you can see the same people forming a recognition of a song they’ve heard pumping from their chosen FM station and/or the opening of their favourite sporting event. Ian Kenny is obviously one of the best vocalists in Australian music today, and although his work with Perth band Karnivool is musically leaps and bounds ahead of what we have in front of us today there’s no doubting his vocal proficiency, mastery of melody and the ability of the band to write a song dripping with hooks.

After a rush to the bar and bite to eat (Newy Burger Co is a VERY popular choice tonight) it’s time for Cold Chisel and you can feel the anticipation in the audience. There’s a shuffle from the top of the hill to better vantage points, people in seats start standing up (often to the disdain of the people behind), groups of friends are taking selfies to mark the occasion and toasts are being made with plastic cups. People are pumped, and no one seems to give a rats arse about the drizzling rain.

The crowd’s made up of die-hard fans, parents who’ve bought along children raised on a diet of Oz Rock and obvious music aficionados.  They’re all focused on the huge Hope Estate stage in front of them waiting to catch the first glimpse of the band as they walk out. And then, unceremoniously, out they come to a hero’s welcome just as the rain starts to get a little heavier and the sun sets. They launch into the opening track from their 1980 album East, Standing On The Outside and we settle in for a night with Australian music royalty.

Cold Chisel are often cast off as “Bogan Rock“, but there’s a reason why they’ve not ended up on the multi-act bills that have recently dominated the Australian music festival scene… And it’s the songs. These are songs that stand up next to the bodies of work from Australian greats such as Vander & Young, Brian Cadd, Richard Clapton and Paul Kelly.

This is evident with the performance of tracks from the band’s new album, Blood Moon. The lead single, Getting the Band Back Together is an early highlight but it’s the Jimmy Barnes, Don Walker penned song, Killing Time, that really stands out. It’s moody and evocative complete with a face-melting solo from Ian Moss, and the band are playing the space between the notes just as hard as they hit the refrain “It’s Killing Time”. And it’s moments like this during the two-hour-long set that show why Cold Chisel have remained a force in the Australian music industry over several decades.

Choir Girl, My Baby and Forever Now really get the set going as the rain well and truly sets in. It looks magical through the lights fingered over the audience, no one seems to care about being drenched or cocooned in plastic and anytime rain is mentioned in a lyric the crowd erupts. At one point Jimmy Barnes thanks everyone for “sticking around” despite the weather, declares himself as the rainmaker and suggests the band should play around the country where it’s needed most.

Notable omissions from the set are Star Hotel and Ita, but when you’ve got as many great tunes as Cold Chisel it’s only the completists who audibly kick up a stink. The performances of Saturday Night, Breakfast At Sweethearts and the sing-along to Khe Sanh make up for any disappointment, and after the third encore, there is little left to be explored. The band have given the 2-hour long concert everything they have and even Don Walker looks to be sweating… Just a little.

All in all, it’s one of the best shows we’ve seen at Hope Estate. Ian Moss is a world-class guitar player, those Don Walker songs still carry an emptional punch, Jimmy’s voice is sounding better than ever and as a band, they obviously still have something to say. We don’t think this will be the last time we see Chisel take a stand.

ALSO ON NEWCASTLE LIVE
BEST OF THE BEST: Cast your vote for the tastiest 2019 Rascal burger of the week
Eco-friendly publication gets a huge boost thanks to Roost Creative scholarship
REVIEW: Bombshell’s tale of sexual harassment packs a powerful punch
The life of Jill Emberson to be celebrated with public memorial next week