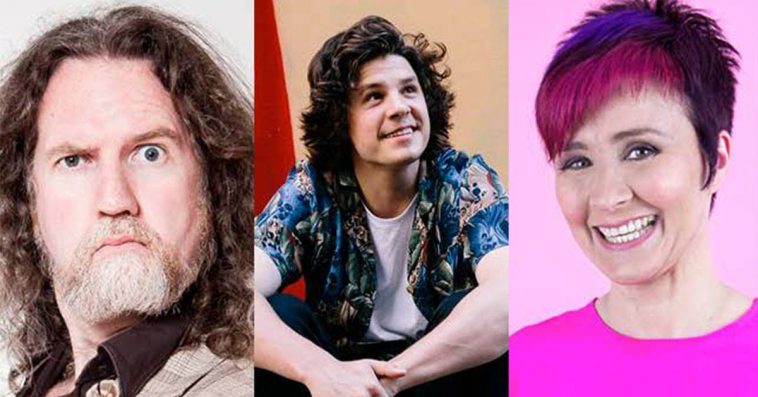 Looking for a laugh? Well, you’re in luck because The Melbourne International Comedy Festival Roadshow is coming to town this June long weekend!

This road trip is jam-packed with a crew of fantastically funny comedians, specially selected to bring the fun of the Festival to towns and cities around the nation. This is a line-up of artists to tickle anyone’s funny bone.

And here is a quick rundown on this year’s impressive lineup!

This hirsute hilarity helper is the Irish-born stand-up who now calls Melbourne home and is best known for his laconic turns on Rove Live and Triple J.

Over the years he has popped up on Good News Week, Hey Hey its Saturday,
Spicks and Specks, The Melbourne International Comedy Festival and Good
Morning Australia with Bert Newton.

No stranger to hosting duties, Dave has hosted the touring Melbourne Comedy Festival Roadshow since 2001 to places as exotic as Mumbai, Singapore, Kuala Lumpur, Penang and of course Rutherglen.

Cal Wilson came across the Tasman in 2003 and has gone on to become one of our
most popular comedians. She is a perennial favourite on television shows such as Spicks and Specks, Good News Week, Thank God You’re Here, and more recently Have You Been Paying Attention? and Hughesy We Have a Problem.

Her stand up shows are as engaging as they are hilarious, often bringing the audience’s stories to life alongside her own.

In 2018, Cal toured her solo show Hindsight, which drew sold-out crowds to comedy festivals around Australia, appeared on the Melbourne International Comedy Festival’s Oxfam Gala and was invited to the Montreal Just for Laughs comedy festival where she recorded a Netflix Original Comedy Special for release in 2019.

After winning the NSW RAW Comedy Final in 2002, Sean headlined the Dreaming Festival 2005-2008 and has performed at the Edinburgh Fringe Festival, the Scottish Storytelling Festival, and the Adelaide Fringe Festival. He appeared on TV in the NRL Footy Show, Thank God You’re Here and the Melbourne International Comedy Festival Gala. He has hosted and recently performed at Deadly Funny in Melbourne, Adelaide, and Perth.

Hailing from Townsville, Sean has an established career as a dancer: he created the Ngaru Dance Company and performed all over the world with the Bangarra Dance Company, including by invitation for the Dalai Lama, Hale & Pace and Prince Charles.

Blake Freeman is one of Australia’s brightest new comedians, making a name for
himself with his own brand of energetic and disarmingly honest comedy. Through his youthful energy and charismatic delivery, Blake weaves charming stories, making the intensely personal relatable.

In 2018 he was hand-picked for Melbourne International Comedy Festival’s
prestigious Comedy Zone and was voted best newcomer at the 2019 festival.

Daniel Connell could easily be described as the ideal Aussie comedian; affable, loveable and hilarious. His observational, dry, often unanticipated comedy has seen him take to stages all over the country.

Daniel first launched himself into the comedy world in the 2009 emerging comedian competition ‘Green Faces’, winning the Canberra heat and placing third in the national final.

In 2019 Daniel made his second appearance on the Oxfam Gala (ABC), as well as performing his new show ‘Piece of Piss’ at Perth Fringe, Adelaide Fringe, The Melbourne International Comedy Festival, The Sydney Comedy Festival, and Edinburgh Fringe Festival.