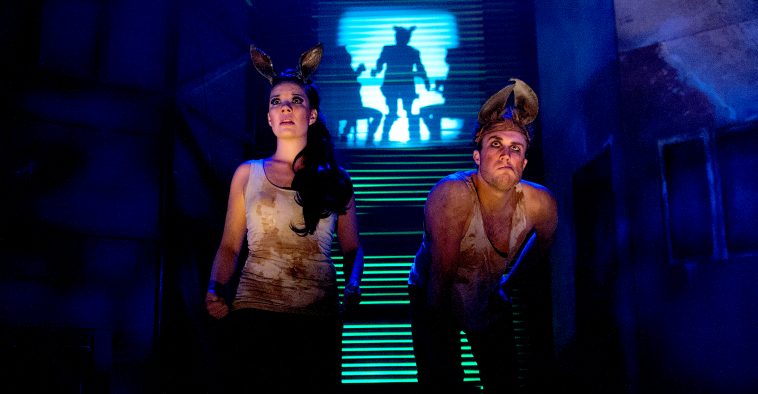 That was the central tenet of George Orwell’s now-iconic 1945 allegorical satire Animal Farm and one that, sadly, still bears chilling resonance some 76 years later.

And next month, renowned Queensland theatre company shake & stir is bringing its acclaimed production of Animal Farm to Cessnock Performing Arts Centre in what promises to be one of the most challenging, relevant and wickedly funny theatre events of 2021.

The intensely powerful tale illustrates, with razor-sharp insight how greed and power corrupts, and with devastating consequences, can change the course of history, and this production has garnered widespread acclaim, collecting more than 15 awards including PAC Australia’s National Tour Of The Year, Best Production and Best Director.

More than 40 animals are portrayed between the dexterous performers, with each actor morphing physically and vocally in front of the audience as they bring the farmyard inhabitants to visceral life.

“We are so thrilled to have the opportunity to revisit this production. It was a joy to create and to now be given the chance to safely return and tour it for six months, nationally, is just fantastic,” adaptor Nick Skubij said.

“Animal Farm has stood by me since I first read it and it still holds great relevance to audiences in 2021. The novel’s ability to clearly, concisely and deeply affect the reader, whilst presenting on the surface as a simple, almost childish parable, is astounding and now more than ever – its message should be heard.”

For the uninitiated, Animal Farm tells the story of the denizens of Manor Farm, where a revolution has taken place. The pigs have assumed control and under the principles of Animalism, and a better life, free from human service, is promised to all.

Guided by a simple set of rules and unrelenting respect for authority, it is not long until the rules that promised freedom, become the chains that bind the animals once again.

“Although our production is an honest and faithful retelling of the novel, audiences will be surprised to see how it has stood the test of time,” Nick added.

‘It’s quite possible the happenings as described on Animal Farm could unfold on the evening news on any given night. The timing of this tour comes hot on the heels of a once in a generation health pandemic and at a time when the entire human population has undergone something of a pause and a reset.

“I hope this production continues to encourage audiences to question the way we live, our ideals, our aspirations and provokes spirited conversation in the theatre foyers.”

Catch Animal Farm at the Cessnock Performing Arts Centre on Monday 24 May. Head here for tickets and more information.