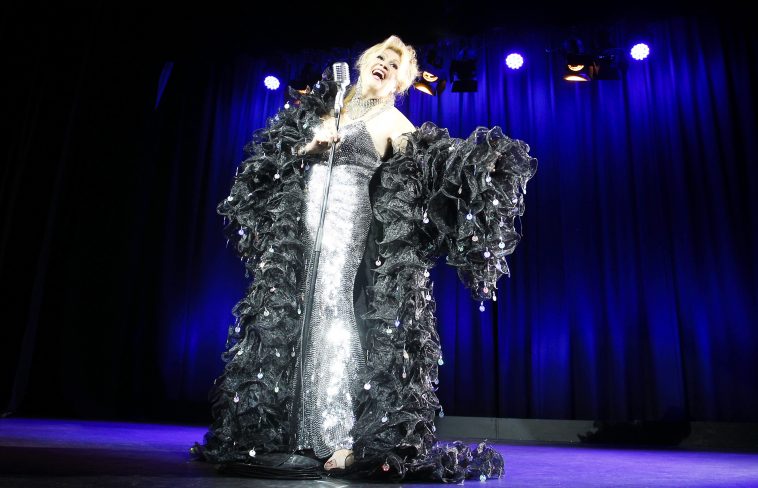 Australian transgender icon Carlotta knows a thing or two about the world of showbiz.

From cutting her stage teeth in the heady days of 1960s Kings Cross, as an original cast member of the iconic all-male revue Les Girls to a stint on the popular Channel Ten show Beauty and the Beast and as the subject of and ABC TV series about her life, Carlotta has more than a few stories to tell about life on the stage.

Now, those stories and more will be told to Newcastle audiences when Carlotta brings her Queen of the Cross show to the Spiegeltent Newcastle next month.

“The Spiegeltent shows are bloody fantastic,” Carlotta told Newcastle Live. “If you forget about the fact you are playing in a tent and look around at those amazing interiors it’s an amazing place to perform.”

The Queen of The Cross, which premiered at the Adelaide Fringe Festival, will take audiences on a rollicking journey through Carlotta’s sequin-draped 50 years on the stage with a litany of songs from the likes of Irving Berlin, Rogers and Hart, Stephen Sondheim and Australia’s own Peter Allen.

When it comes to the stories, don’t expect any diva-like behaviour from Carlotta, who was an inspiration for the film Priscilla Queen of the Desert.

“And I also like to poke fun at myself a little bit as well – in fact I tend to rip the crap out of myself.”

At 75, you could forgive Carlotta for wanting to leave the stage and reflect on her amazing career, however that isn’t going to happen any time soon.

“I always say we are here for a short time, not a long time, so it’s all about doing what you love and I love nothing more that getting out in front of an audience.”

Carlotta, who has never been a shrinking violet when it comes to letting her opinions be known (as evidenced by her stint on the glorious Beauty and the Beast with the late Stan Zemanek) and she wasn’t backward in coming forward when discussing the state of the nightlife in her beloved Sydney.

“These bloody lock-out laws are killing culture in Sydney,” she said. “I remember years ago travelling to the US and the UK and all anybody could talk about was the vibrant nightlife in Kings Cross. Now, the Cross is like a dead hole.”

Carlotta, who was one of the first people in Australia to publicly undergo a sex change, said that 1960s Australia was a much different country to what it is in 2019.

“We definitely did it a lot tougher in those days,” she said. “There’s definitely still things that could be done better, but I do think it’s a lot easier now.”

Carlotta was also one of the first transgender people on Australian TV, playing blonde bombshell Robyn Ross in the racy 70s show Number 96.

She said that she was heartened by the fact that long running soap Neighbours has cast its first transgender actor in the form of 18-year-old Georgie Stone, but she urged the producers to treat the storylines with care.

“I am so happy for Georgie and I wish her all the best butI really do hope that they [producers] do it with dignity and not for sensationalism,” she said.

“Even with all of the strides that have been made, there are still a lot of suicides in the gay community, so the way Neighbours approaches this story is really important.”

Catch Carlotta when she performs at the Spiegeltent Newcastle on Thursday 30 May. Get your tickets here.