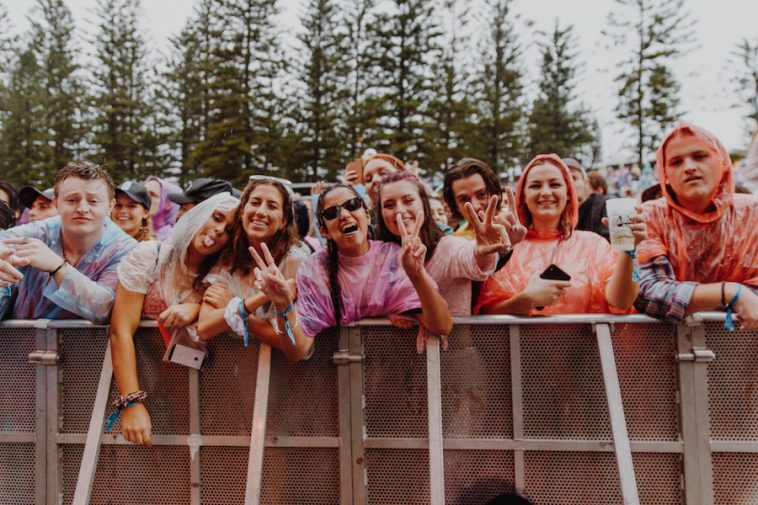 Revellers were treated to good vibes & mudslides in King Edward Park, in Newcastle on Saturday as The Drop festival rolled into town.

Supported by Triple J and part of the World Surf League celebrations The Drop Festival saw 1000’s turn out, despite the rain, to enjoy its offerings.

On arrival you couldn’t help but notice that the site presented organisers with challenges and as the evening progressed some challenges for punters too. But really, we’re here for the music and man, it did not disappoint!

Local band PALS kicked off the snappy, six act bill – serving up rock with very little eye contact but great guitar work. Next to grace the stage was the affable Alex the Astronaut who delivered a set which only increased our admiration of her and made us all feel better about ourselves. Win-win.

Promoted as an environmentally sustainable event we loved visiting the bar to find reusable cups available for our beers and cider – well worth the initial $2 investment, a memento and a move away from so much rubbish.

Speaking of single use plastic…a sea of rainbow coloured ponchos surged forward as duo Hockey Dad raised the volume and tempo. Offering a solid set, by the time the surf rockers dropped light-hearted hit ‘Sweet Release’ the crowd had all but forgotten it was raining at all.

And just like that, the skies cleared for what in our humble opinion was the true headline of the show, crowd fave Client Liaison.

In his cropped jacket, cumerbaund and culottes, limber frontman Monte Morgan led the band through a sensational time warp of synchronized dance moves and retro-electro tunes including a crackin’ interpretation of ‘Need You Tonight’ and the so sex-hay ‘Off White Limousine’.

By this time the Drop Festival zone was quite the mud-run but Brisbane’s Ball Park Music got us dancing, despite the risk of eating dirt. Obviously enjoying themselves the 5 band impressed with ‘It’s Nice to Be Alive’ and ‘She Only Loves Me When I’m There’.

Another drizzle and the headliners had arrived. From the “lalalalalah’s” of ‘Snow’ right through to the “oohoohoohooh’s” of ‘Chateau’ siblings Angus & Julia Stone delivered ethereal melodies. Jet planes, dope lemons and mass-swaying ensued and in a happy bubble the mostly very (we’d even say extremely) well-behaved crowd (take note Gladys: NSW, and more importantly Newcastle – needs MORE live music, not less) made their way from the sodden site (we’re sorry King Edward Park) and travelled home with sweet lullabies in their ears and lasting music memories in their minds.