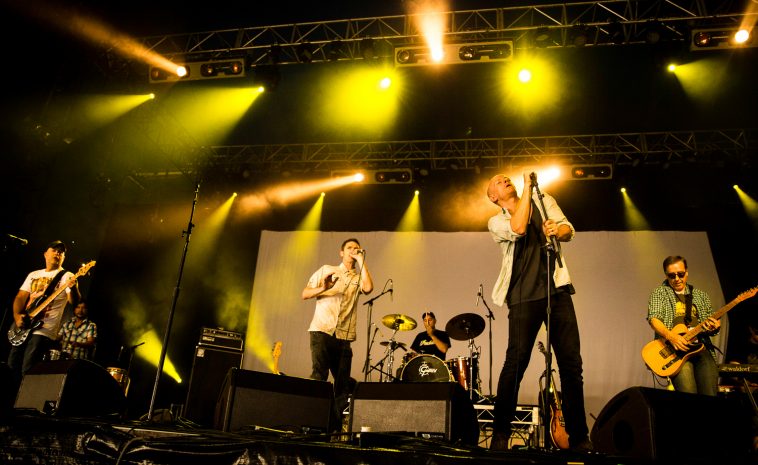 To many, the ’90s could be considered a golden period for the Australian Music Industry. For myself and my circle of friends, SKUNKHOUR has been the go-to soundtrack for many a late night gathering. As the band prepare to hit Newcastle for the Scene and Heard Festival, KEVIN BULL had a quick chat with AYA LARKIN about those heady days and the possibility of new music in the future.

Four albumsreleased in a decade, it’s pretty good going. Did the band deliver all the music it had in them during that time?
We had a few “great white whales” that we chased and never quite caught, but on the whole we got it all out in those four albums and a couple of EPs (State, McSkunk)

In hindsight, how do the ’90s sit with you in terms of the band’s achievements?
Achievements are, of course, subjective but we rolled, and zig zagged, and toured, and created our little hearts out. To a degree we blazed our own trail, had a Gold Album, multiple OS tours, and are the only Australian band in the International encyclopaedia of Funk. There’s always someone who’s done better and those who didn’t get to where you got. We endured for a while and left a lot of good memories with a unique style.

With a critical eye, is there anything you consider as missed opportunities?
After our first two albums were released and promoted by Acid Jazz (unfortunate name) records in Europe, and we toured our arses off twice to great crowds, the rights to our 3rd album then reverted to Sony Records International. Incredibly they decided not to capitalise on our considerable following throughout western Europe, and none of the Sony subsidiaries put out the album. Insanely disappointing and demoralising at the time. Basically left such a bad taste in our mouths, being in that kind of a deal where if some label head in France doesn’t want to work the album you’re stuffed…, that we sought a release from Sony. That was a huge opportunity lost. Now I will breathe deeply and go to my happy place.

2001 – the year of The Go, and the year Skunkhour took a break. Can you give us some insight into where your minds were at during this time.
More record company problems, this time the head of Universal Records was sacked just asThe Go came out, which meant a degree of chaos at the label. Some of us wanted to stay in Australia to do another album with the label, others wanted to move as a band overseas. We enjoyed playing with each other still but wanted different lifestyles I guess you could say… It was time to hang it up for a while on what we felt was a good note.

Following the 2001 break, it took close to a decade for the band to perform live again. Why was this? What did you get up to during this time?
We scattered to the four corners of the country / earth. Paul (keyboards) to Singapore, me to the U.S, Warwick (guitar) to Adelaide, Dean (bass) ended up in Byron later. That made it logistically challenging to put a gig, let alone a tour, together. I initially did a bit of music for Theatre with Paul. Then I moved to Los Angeles, playing gigs, writing, putting together recordings that later became an album. Met a woman, had two children and fostered other aspects of life.

Following those initial return shows in 2009, I have been expecting a full scale Australian tour and new music. Yet there has only been a handful of live shows. What’s the chances of some new music and more opportunities to see Skunkhour live?
Creating some new music together is a possibility, and I reckon it will happen. Several of us have gravitated back toward Sydney again which makes it more likely to strike up, but It has to be generate organically, and I get the sense it will. The desire to continue to play live is very present, and we’ll keep getting avenues to do it. It’s such a buzz to share it with the audiences who come ready to revive those tracks with us.