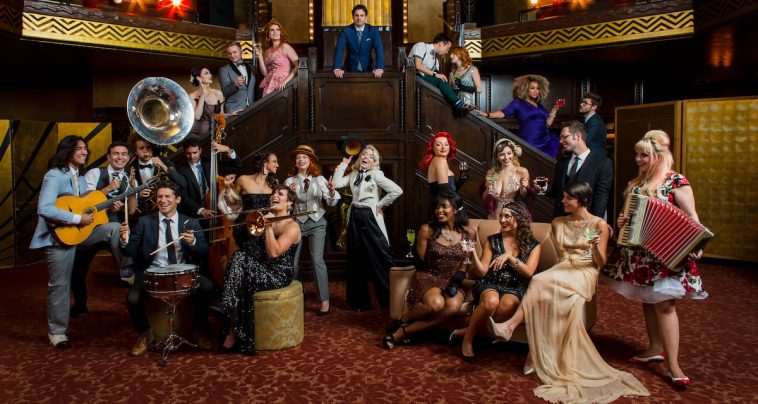 They are the lauded time-twisting collective that last graced our fair city back in the innocent, pre-COVID days of 2019.

And after having to scuttle an anticipated world tour in 2020 due to you know what, Postmodern Jukebox are winging their way back to Newcastle for what promises to be a brilliant show at the Civic Theatre on Tuesday 22 February 2022.

The musical collective renowned for putting pop music in a time machine, are hitting Oz on their Grand Reopening tour (all things being equal, of course) which will see Postmodern Jukebox rip through a delightful set featuring unique renditions of modern music’s biggest hits in the classic styles of yesteryear.

PMJ head honcho Scott Bradlee said he and the band were champing at the bit to get back on the road.

“Ever since our first trip Down Under in 2015, we’ve made Australia an annual stop on our tour itinerary and have gotten to meet some of the best audiences in the world, as a result,” he said.

“We have been so sad to miss a couple of years of this annual tradition due to the pandemic, but we’re thrilled to announce that we’ll be back better than ever in 2022 for our sixth tour of the continent.

“We have a lot of catching up to do! Bring your dancing shoes and let’s get together to ring in the New Twenties, PMJ style.”

The show will feature an ensemble of multi-talented singers and musicians, bringing Scott’s generation-spanning arrangements alive night after night.

Surprise guests often join the core ensemble to make each concert unique and unpredictable, making for one of the most thrilling live music experiences of this (and any other) time period.

Over the past decade, Postmodern Jukebox has grown from a viral phenomenon into a worldwide juggernaut, amassing more than 5 million subscribers and 1.6 billion views on their YouTube channel.

PMJ’s growth has not been limited just to the digital world, with the outfit evolving from Bradlee’s tiny apartment in Astoria, Queens, to a Los Angeles studio befitting the bandleader’s increasingly ambitious vision.

Most recently, PMJ reimagined the beloved theme from Friends via the evolution of music styles throughout the 20th century — beginning in the Hot Jazz 1920s and climaxing in the 90s with a guest appearance by original I’ll Be There For You performers, The Rembrandts.

Catch Postmodern Jukebox at the Civic Theatre on Tuesday 22 February 2022. Tickets are on sale from 10am, Friday 28 May.