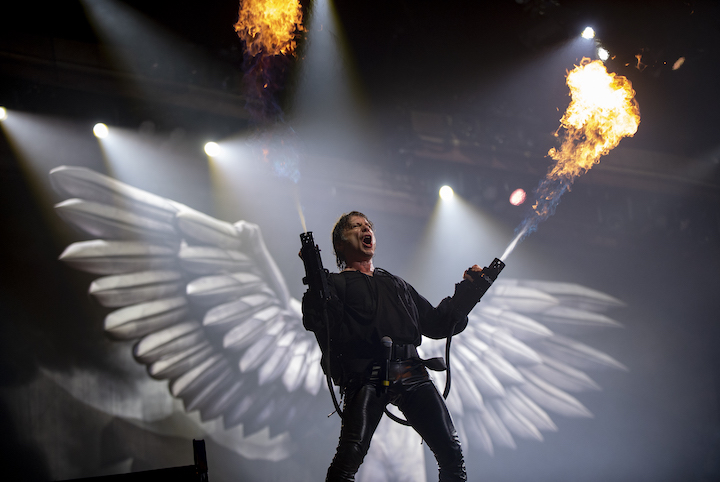 It’s been hailed as the most extravagant and eye–poppingly massive tour in their career.

And now metal behemoth Iron Maiden are bringing their Legacy Of The Beast down under in 2020.

Yes, that’s right! The band, who were last here back in 2016, will be playing five massive stadium shows with the Sydney gig slated for Thursday 7 May at Qudos Bank Arena.

Oh, and they’re bringing metalcore legends Killswitch Engage along for the ride!

Since the tour kicked off back in May 2018, the band has played to nearly two million fans across 39 countries including headlining a capacity crowd of 100,000 at the iconic Rock in Rio Festival.

The concept of the tour is inspired by the Iron maiden comic and mobile game and frontman Bruce Dickinson said he couldn’t wait to bring the ambitious show to Australia.

“It’ll be four years since we were last in Australia, so we’re delighted to be making a return visit to present the Legacy Of The Beast Tour to all our fans there,” he said.

“The production for Australia is exactly the same as the other shows on this tour so far and is based on our mobile game, which basically takes various incarnations of Eddie into many different Maiden Worlds. This inspired us to put together a stage show to take our fans through different Worlds and experiences set to appropriate songs.

“It is not that easy designing different Worlds on stage and we put a huge amount of work into this to make it work and the end result we feel is our most spectacular and certainly the most complex show to date.”

Aside from all the ‘whizbangery’, that includes replica Spitfire planes, a giant Icarus, muskets, claymores and, of course, Eddie, bassist Steve Harris said that the set-list was just as spectacular and painstakingly curated.

“We feel we ended up with a very strong and well-balanced set mixing songs we haven’t played in many years like Flight Of Icarus, Sign Of The Cross and The Clansman with songs we know the fans want to hear like The Trooper, 2 Minutes To Midnight, The Number Of The Beast, Fear Of The Dark, Run To The Hills, Hallowed Be Thy Name and others, reflecting the journey through the different themes of the show,” he said.

We’re excited to be bringing this tour to Australia as much of the setlist comprises songs which our fans will know well but which haven’t been performed live there for over ten years, some of them even longer than that. The whole band is really enjoying this tour and we are really looking forward to seeing everybody again!”

Iron Maiden play Qudos Bank Arena on Thursday 7 May 2020. Tickets go on sale at 12pm on  Thursday 14 November through Ticketek

Telstra Plus member presale starts Monday 11 November at 1pm and is open until 1pm on Wednesday 13 November. Go to Telstra.com/music for further details.

As always, there will be an exclusive pre-sale for Iron Maiden fan club members. Head here for all ticketing details