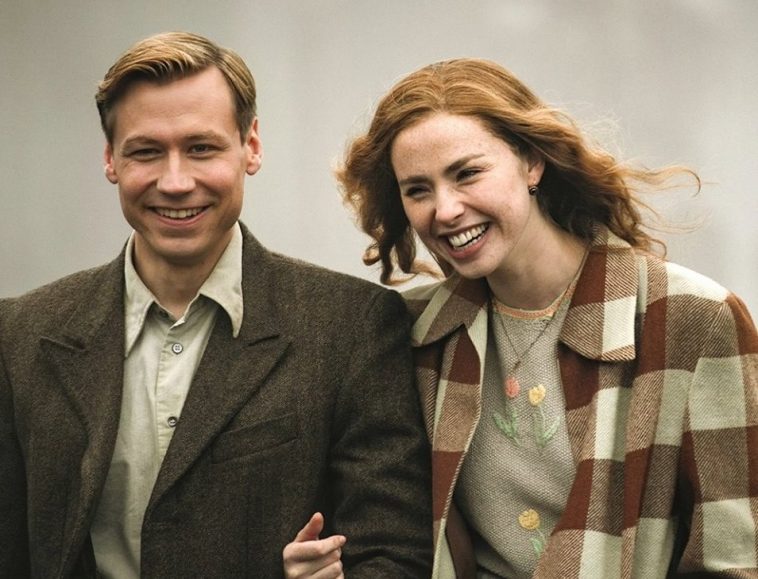 Towards the end of WWII, there was a PoW camp not far from the northern English town of Manchester. While visiting the camp, Jack (Henshaw), the manager of a local football team, notices one of the prisoners, Bert (Kross) is an excellent soccer goalkeeper.

His team, Manchester City, are struggling and just happen to need a goalie. Jack manages to get Bert out of the camp to work for him and play soccer for Man City.

Bert is not only an exceptional goalie, but he is also falling in love with Jack’s daughter Margaret (Mavor).

As the war ends, local sentiment is, of course, strongly anti-German. Bert faces an uphill battle to be accepted by the community who’ve suffered as the Germans bombed Manchester. Manchester is also home to a large Jewish community and their opposition to Bert is loud and emotionally charged.

But support comes in the unexpected form of a local Rabbi, who fled the Nazis during the war, when he publishes an open letter asking for tolerance and peace.

Firstly, this is based on a true story. I suppose if it wasn’t it would seem unbelievable that a German solder would be playing soccer for a foreign team, even before the war had ended. But true it is.

And if you’re worried it is just another soccer movie, fear not. This movie is mostly a romance with some soccer and a whole lot of morality thrown in.

How could it not be?

The movie doesn’t shy away from the conflicting emotions of not only the main players, but the entire community, as Bert slowly but surely wins them over with his soccer skills and his marriage to a local girl.

But tragedy was to stalk the young family with Bert always feeling he was to blame because of things he saw and did while enlisted in the German army.

I admit, my eyes did leak once or twice during this lovingly told story.

If you love well told, very English movies, this one’s for you.