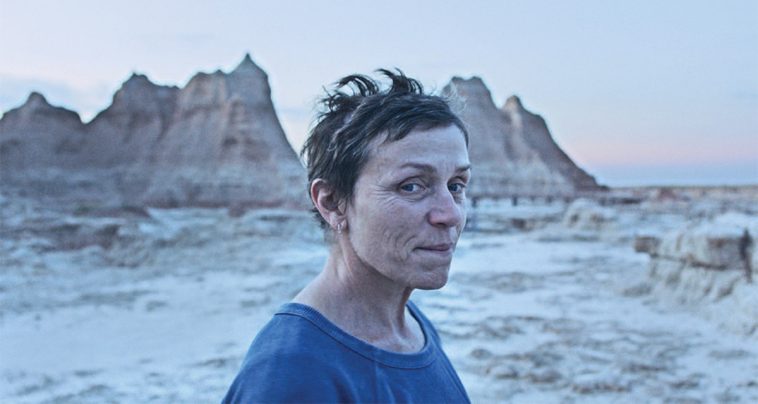 When journalist Jessica Bruder released her non-fiction book, Nomadland: Surviving America in the Twenty-First Century in 2017, she couldn’t have anticipated the impact it would have four short years later.

Her moving and honest book started life as a piece written for Harper’s magazine. Thought-provoking and raw, it shone the spotlight on the plight of the invisible, mostly older Americans who’ve taken to the road, either by choice or circumstance, following the 2008 Global Financial Crisis.

The book was quickly optioned by two-time Oscar winner Frances McDormand who brought in director Chloe Zhao to adapt the book and direct the movie.

Zhao, although a relative newcomer, has built a reputation for using real people in her movies. And it’s this aspect that gives Nomadland the emotional impact that takes it from being just another van-life movie to something powerful and compelling.

The movie centres on the fictional Fern (McDormand), a woman in her mid-sixties who suddenly finds herself without a husband, a job or a home. Taking to the road in her personally customised but seen-better-days van, that she lovingly names VanGuard, Fern quietly yet defiantly comes to terms with her new reality.

In one scene, confronted with a former student who asks if she’s homeless, Fern responds ‘Not homeless, just houseless. Not the same thing, right?’

And that’s the thing. These modern nomads travel the roads of the United States, picking up seasonal, low-paying work to survive. Woven into the story are real life nomads, three of who were featured in Bruder’s original story.

The main real life characters are the eternally plucky and hopeful Linda May, Bob Wells, who is something of a nomad legend, and the philosophically resolute loner, Swankie. These three non-professional actors give the movie it’s true heart and soul, a fact with which I feel quite sure the movie’s professional star, McDormand would wholeheartedly agree.

Awarded the Golden Lion at the Venice Film Festival and with a slew of BAFTA’s, including the coveted Best Film, Best Direction, Best Actress and Best Adapted Screenplay already under its belt, Oscar glory is just a matter of time.

I expected Nomadland to be a gritty piece. McDormand has built a career on her no-nonsense, down to earth characters. However, what I didn’t expect was such a raw, uncompromising look at a group of people, whose numbers must surely be increasing after the recent pandemic.

I read someone describe the movie as a love letter to the American Midwest. And while the award-winning cinematography and ancient landscapes are indeed breathtaking, this movie is no love letter.

It’s an eye opening docu-drama that sheds light on the plight of some forgotten people. It never strays into pity or judgement yet doesn’t flinch portraying what life is really like for some of those who’ve chosen to take to the roads in their later years.

It’s towards the end of its cinematic run here in Australia but is still screening at Scotty’s Cinema in Raymond Terrace into next week at least.