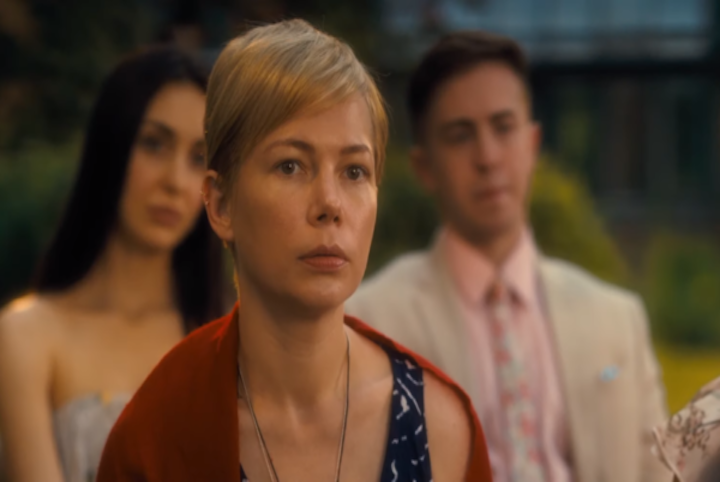 Isabel (Williams) works with children in an orphanage in India. The orphanage, as these places often do, relies on donations from rich Westerners to keep afloat.

Isabel must leave her orphans and travel to New York to meet the benefactor in person, something she is loath to do.

She really, really doesn’t want to go back to New York. We suspect there’s a reason.

In New York, put up in a swank hotel, given access to a mobile phone, a driver and the hotel’s concierge, Isabel, visibly awkward and uncomfortable in her surroundings, is taken to meet her enigmatic patron, Theresa (Moore).

Isabel dutifully attends the wedding …. I mean there’s lots she can do with $2 million, but the moment she lays eyes on Theresa’s husband Oscar (Crudup) her face drops and we know something’s up here.

There is some serious star wattage in this movie with Williams, Moore and Crudup each wonderfully capable actors. But it’s the two women who take centre stage and so you’re expecting great things.

And they do deliver.

Their performances are warmly serene and breathtakingly nuanced. Williams, with her pixie hair and huge doe eyes, positively vibrates with unease, doubt and mistrust throughout the entire movie.

Nevertheless, it’s Moore, whose character is revealed ever so slowly over the almost two hours, who must duck and weave as her character pivots on an ever-tightening string as the story progresses.

Crudup, bless his heart, is the lynchpin to the story’s grenade and never falters. Nevertheless, it’s the young bride Grace (Quinn), the daughter of Theresa and Oscar, who impresses as she more than holds her own in her scenes with both Moore and Williams. This one is one to watch. Mark my words.

The drama that unfolds on screen is well worth the price of a movie ticket, but the movie doesn’t quite know what it wants to be. It’s far too lovely and twisted a tale to be relegated as a mere drama but it lacks the true suspense to be much of anything else.

It’s not a weepy and it won’t take you a great deal of time to figure out what’s going on but the why may just surprise you.

A nice movie to go see with your BFF, mum or grandma.