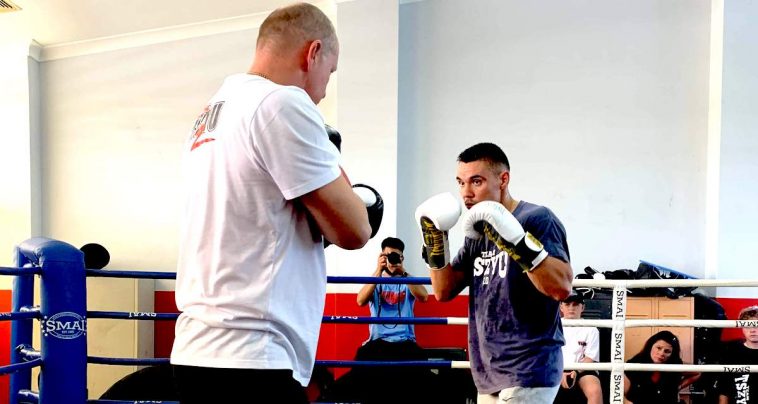 Much like his father, Tim Tszyu is focused, softly spoken and extremely unassuming. But when he hits the pads, you can feel it to the soles of your feet.

Tim is the son of former world champion Kostya Tszyu and the 26-year-old is about to feel first-hand the love and affection a Newcastle crowd provides when he takes on Dennis Hogan at the Newcastle Entertainment Centre on Wednesday night.

He was in the zone during a two-hour training session at Broadmeadow PCYC this week, barely aware of the 30-plus people surrounding the ring looking on in awe.

But despite the wide-eyed fascination from those around him, Tim Tszyu was focused on one thing and one thing only – winning and being the world’s best.

“I can’t wait to fight. Training is one thing but fighting – it’s just ‘get in there and punch’,” Tim said.

“I’ve been trying hard for this particular moment. I’ve got great responsibility now to fight in front of everyone. Hopefully, I’ll deliver, and I believe I will.”

The surname Tszyu is a hard one to live up to in the boxing ring but Tim is his own man.

“I remember how hard things were for dad and how much dedication you have to put in,” he said.

“I saw a completely different side and now I’m living that side. That’s why these guys, the ones around me for T2, know the work that’s involved, and they know the mood that you’re in and how tired you get as well as the soreness and everything involved with boxing.

“That’s what I remember – it was rainbows for everyone else, but I was there and there was a lot of tears and a lot of pain in between. It’s not all fun and games.”

“I’m enjoying the whole process, but it’s not easy. I had a great responsibility from a young age and from the start of my career. So, I’ve grabbed it with both hands, and I try to make the most of it. People have different opinions on what growing up with a dad such as my dad. There was no such thing as a silver spoon in your mouth. Everything you did you have to work hard for it.”

It’s that workmanlike attitude that has driven Tim to the edge of greatness. It’s a lonely road for Tim, especially in the ring, but the close-knit Team Tszyu 2 is very much a family affair.

However, with Kostya based back in Russia, the management of Tim’s career has fallen to the man who was beside his father more than 20 years ago, Novocastrian Glen Jennings.

“Having these guys guarding me and not allowing all the circus, the monkeys and animals to attack me is what I truly need,” Tim said.

“To focus on what I need to do and leave everything else to the people I trust.”

When Tim enters that ring, he feels like everything shuts away. He can’t hear the crowd, there are no distractions, and everything blocks out. And that singlemindedness is what has, and will, allow him to become a world champion.

“I’ll be 100 per cent ready to go on Wednesday night and I’ll let my hands do the talking,” he said.

“It’s a sacrifice because you miss the special moments in life.  Hours and hours of dedication mean I miss out on things like engagements, weddings and special family moments, but it all comes down to Wednesday now.”

Tim’s greatest and most vocal supporter is his mother; Natalia who will be ringside on Wednesday night.

“I need to remind her to keep her mouth closed, sometimes she’s a bit too loud at the fights,” he laughed.

Wednesday night is go-time for Team Tszyu 2. The weigh-in has already happened, training has finished, and no more sparring. It’s time to put on a show for the city that he been dubbed Tszyu Castle.

No matter the outcome, this young man is already a world class individual and how far he goes in this sport will be entirely in his own hands. We can only wish him the very best of success on his journey.