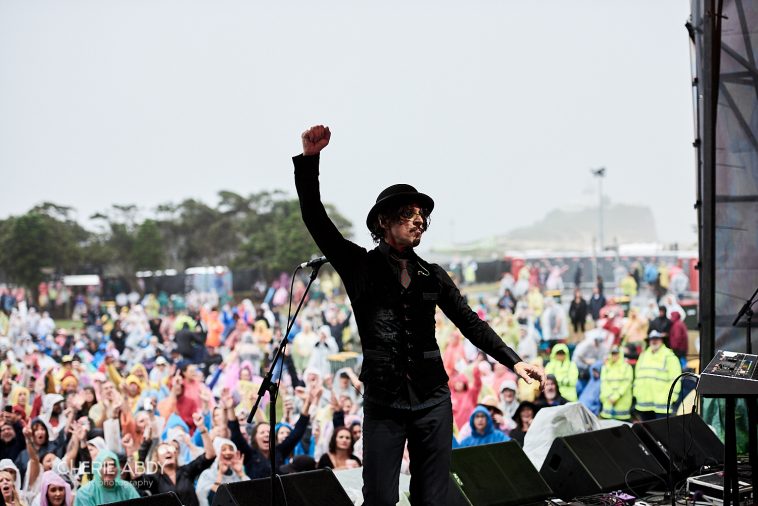 Mi-Sex rocking out at Live At the Foreshore. picture: Cherie Abdy
ShareTweet

While the weather may not have been conducive to creating the ideal atmosphere for Live At The Foreshore at Camp Shortland on Saturday, a stellar lineup of some of the finest acts to grace Australian stages over the past 30-odd years more than made up for the wet conditions.

From the moment Newcastle heroes DV8 kicked off proceedings with a high-energy and well executed set, the rest of the day was a litany of ‘all-killer-no-filler’ sets from the likes of The Badloves (The Weight was a definite highlight), Mi-Sex (frontman Steve Balbi had the crowd in the palm of his hand) and Pseudo Echo (how can you not get up and shake it to Funky Town?)

Wendy Matthews brought a reflective and romantic mood to proceedings with her hits The DayYou Went Away, and I Don’t Want To Be With Nobody But You, Kate Ceberano gave a joyous performance that had the crowd up and dancing with abandon and Shannon Noll’s rousing rendition of the Moving Pictures classic What About Me was a standout of the day.

At 70, you could forgive Leo Sayer for wanting to take it easy when he hit the stage, but the You Make Me Feel Like Dancing star cut through his half-hour set with an energy and enthusiasm that would put many acts, 50 years his junior jealous.

There was a slight hiccup during Marcia Hines’ foot-tapping, disco-tinged set, when the PA unexpectedly cut out, due to water leeching into the system.

The technical glitch left the former Australian Idol judge and her band standing on the stage while the problem was rectified. Ever the professional, Marcia took the technical difficulties in her stride and continued to deliver a stellar set once normal service was resumed.

While all acts on the line-up ‘brought the heat’ so to speak, the definite standout of the day was Jets Play Jets – the re-pairing of former Screaming Jets members Grant Walmsley, Richie Lara and Brad Heaney with the addition of Justin Ngariki on vocals and Paul Coxson on bass.

Aside from a few ‘warm-up’ shows, this was the first time that Walmsley, Lara and Heaney had performed together for 26 years and the smiles on their faces – particularly Lara , who was grinning like the Cheshire Cat from go to woah – proved that this was a reunion that was way too long in the making.

Playing all the hits from the Jets’ first two albums All For One and Tear of Thought, as well as the EP Living In England, Jets Play Jets offered a triumphant performance, thanks in no small part to the uncompromising vocal delivery and formidable stage presence of frontman Ngariki.

While options to escape the rain may’ve been scarce on the ground, and the $1 recycling deposit at the bar had a few scratching their heads, Live At The Foreshore provided the perfect musical walk down memory lane.

Live At The Foreshore