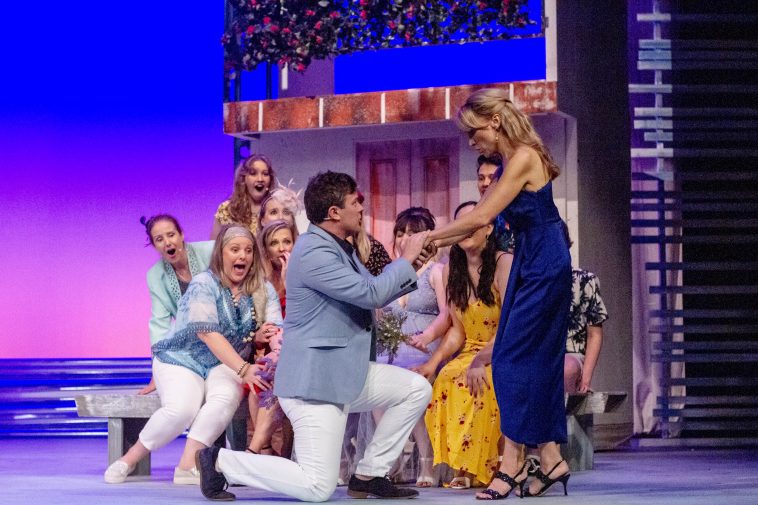 It’s the uplifting musical that is proving to be the hottest ticket in town.

And now The Very Popular Theatre Company and Newcastle Live are giving YOU the chance to live out your dreams of being a star of the stage in Mamma Mia!

Yep, that’s right. We are giving you the chance nab a coveted cameo in the performance this Friday 8 November.

You will join the cast before the show for a rehearsal and costume fitting before appearing on the iconic Civic Theatre stage for Mamma Mia’s final wedding scene.

The winner will need to be available for rehearsal at 5.30pm this Friday and also to come backstage during the show’s interval in order to join the cast on stage in the second act.

Featuring hit after hit from the incredible songs of ABBA including Dancing Queen, Voulez Vous, S.O.S, Take a Chance On Me and The Winner Takes It All, Mamma Mia tells the hilarious story of a young woman’s search, on the eve of her wedding, to discover the identity of her father.

This brings three men from her mother’s past back to the island they last visited 20 years ago.

A mother. A daughter. Three possible dads. And a trip down the aisle you’ll never forget! Mamma Mia is the perfect musical for the whole family.

So how do I win this awesome prize?

All you have to do to nab this once in a lifetime opportunity is email rockon@newcastlelive.com.au and tell us in 25 words or less why you deserve to star in this awesome production.

Oh, and you’ll need to be pretty on the ball to learn the scene quickly! Once the winner is announced, The Very Popular Theatre Company will get in touch to coordinate costume and rehearsal call times.