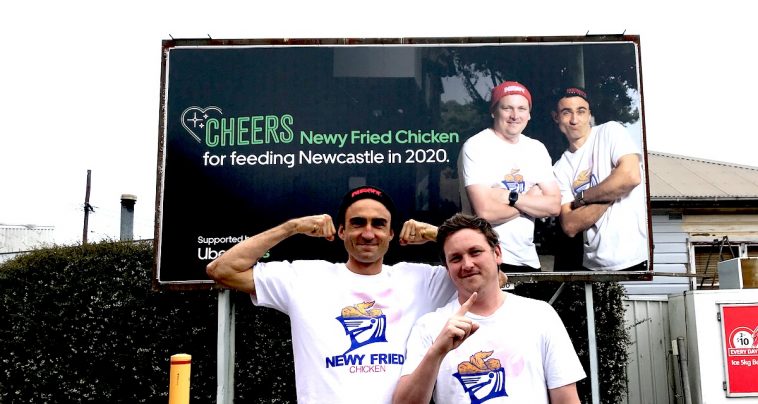 There’s no denying that the flavours coming out of the Newy Fried Chicken kitchen are larger than life. Well, now so are the legends behind the popular Islington-based eatery.

That’s because food ordering and delivery platform Uber Eats has featured Nic Brady and Sam Turner on a billboard to say “thanks” for keeping us hungry Novocastrians fed during COVID.

The billboard, which can be seen on Maud Street in Waratah, features Nic and Sam both striking a cheeky pose next to the words: ‘Cheers Newy Fried Chicken for feeding Newcastle in 2020.’

Nic added that while such recognition was always welcome, he and the team at Newy Fried Chicken had been overwhelmed with the level of community support the business had received. Especially during COVID.

“It’s quite humbling and overwhelming to feel the support from the community,” Nic said.

“The fact that people really believe in the simple product that we’re offering, that we’re doing it right, and people can tell we give a s**t, is fantastic.

With the pandemic pulling the rug out from underneath Newy Fried Chicken, and indeed pretty much every hospitality business, some ‘out of the box thinking was necessary.

“It was really nerve-wracking for everybody in the beginning because there were so many unknowns. It was kind of like ‘what do we do here? What do we scale back?” Nic said.

“After we took a breath we decided to move to a with a pick-up and delivery model. Also, we didn’t have a website previously so we quickly pivoted to an online ordering system which we rolled out in about a week.”

While you would forgive any eatery for scaling back its offerings during a global pandemic, Newy Fried Chicken went the other way which meant that staff could be retained and hungry diners could still get their fried chicken fix on the regular.

“We went from just two of us to three of us, to five of us in the kitchen which is pretty small,” Nic added.

“Also during the lockdown, we increased our menu. When we first started the business, we had one Sando and a few fried chicken options – we wanted to make it as simple as possible so we could provide the best quality product.

“Then we expanded to two Sandos and when lockdown happened we were like we need to have a few more options on there to give people a bit more choice and it’s more fun in the kitchen as well.”

So just what have chook crazed Novocastrians been craving during these uncertain times?

“The Sunday Sando and the Lockdown Sando have been super popular. The Lockdown is definitely my favourite but I like it extra hot,” Nic said. “The boys in the kitchen reckon the Lockdown, extra hot with extra cheese is the way to go.”

“But the other thing that’s really been popping off is our Boujee Bucket [a mountain of wings or tenders served with large fries and your choice of sauce] which I can also highly recommend.”

This writer can also attest to the Lockdown’s awesomeness as well as the amazing vegan Popcorn Cauliflower Sando.

So, just what is it about the lure of fried chicken that has people salivating at its mere mention?

“It’s such a simple offering, it’s working-class food, and you don’t eat it every day but when you do, it’s instant satisfaction.,” Nic said.

“We do Nashville-style fried chicken and I would say that it’s akin to taking a highly addictive drug.”