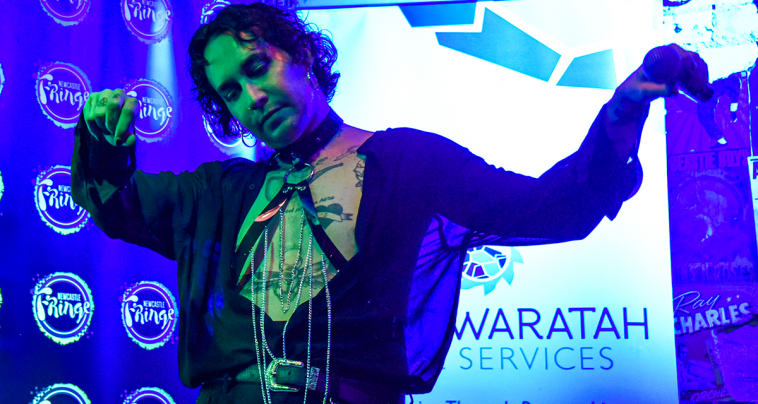 Dubbed Australia’s biggest little fringe, this year’s festival presents over 130 performances at 10 different venues from Thursday 17 to Sunday 27 of March.

The launch featured event formalities, washed down with some amazing Rogue brews and showcased several artists who will perform shows over the next two weeks.

Highlights included an opening set from standup comedian Eddy Rockefeller, a preview of the Lou Chapman Show and a show-stopping performance from local muso Georgina Winchester who presented a short grab from her cross multi-disciplinary performance, Piano From Gresford.

#Protip – Do not miss Piano From Gresford!

Newcastle Fringe Chairperson, Brooke Twyford spoke about the dedication of the handful of volunteers who make Fringe work.

“We don’t get a lot of funding, which means that this massive festival is only made possible by the passion and enthusiasm of our board members and the support of our sponsors and media partners,” Brooke said.

Vice-Chair, Marketing & Partnerships Coordinator Liane Morris was fulsome in her appreciation and thankfulness for the festival’s partners.

“There would be no Newcastle Fringe Festival without Port Waratah Coal Services who have been a loyal partner since almost the beginning of the event in 2016,” she said.

“We have a very small budget, so we rely on the involvement of media partners to really get the word out.”

Ticket prices to festival shows average around $20 to $30 with most shows only going for one hour enabling people to attend several shows per night with 70% of all ticket sales going directly to the artists involved.

The 2022 Newcastle Fringe takes place across the city from today, 17 March until 27 March. Visit newcastlefringe.com.au for more information and to purchase tickets.