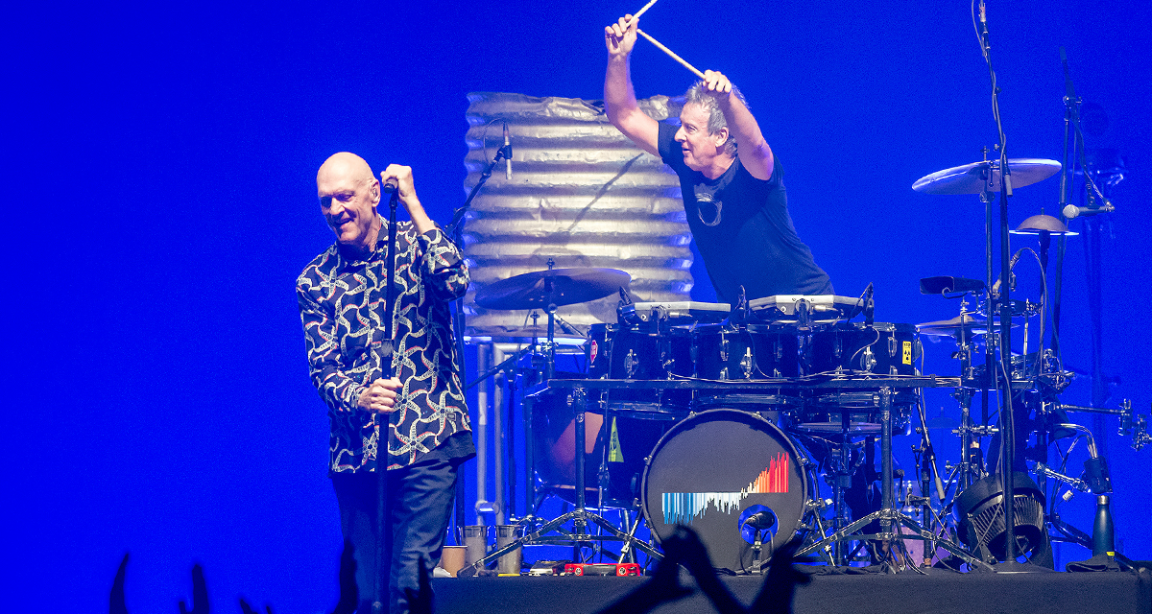 The tour is on the back of their new album Resist and the show itself reinforced the importance of issues like environmental protection, reconciliation and a deep love of country.

The night was opened by William Crighton who has just released his acclaimed new album Water and Dust.

Crighton’s voice is so rich that it seems to create its own harmonies. His show began with just his voice and a song that sounded more like a chant that held within it, the spirits of thousands.

The raw essence of Crighton’s music bled through the audience, holding each member within its grip.

Other than Crighton’s voice, the cavernous room was dead silent. His performance was truly a spiritual awakening, his voice so raw and smooth that it felt like he had opened his chest to give every last ounce of himself to the performance.

Crighton was then joined by the rest of his band which featured the iconic Jeff Lang as well as Julieanne Crighton with her hauntingly beautiful backing vocals.

Soul cutting lyrics such as those featured in Killara carried the words full of the tragedy and suffering felt and inflicted upon Aboriginal people. Your Country was a plea for Australians to dedicate any sort of possessed privilege to fight and bring justice to the true custodians of the land.

There has never been a support act more suited than William Crighton was to Midnight Oil.

Midnight Oil entered a simple stage with nothing more than the instruments and a huge screen behind them. The audience saw silhouettes of the band standing in front of a montage of moments of protest and activism that have punctuated the Oils’ career so significantly. This was the background as the band launched into the title track from their new album Resist, followed by Nobody’s Child and The Barka-Darling River.

After the touching start to the show, Garrett took a moment to recognise an important member of Midnight Oil, Bones Hillman, who was with the band until his death in 2020.

It felt as though the band were ready to tour with his memory alongside them, keeping them company and supporting them through their final tour. It was here that Garrett also revealed that Midnight Oil were going to deliver all the significant song moments from their illustrious career.

The fourth song saw the floodgates open. It was here that the pent up force of an excited audience was let loose en masse. The song was Back on the Borderline and, from that moment on the energy was electric. The remarkable thing, for this reviewer anyway, was witnessing a band whose average age is 60+, turn a multi-generational audience into a cacophony of teenagers, reliving the band’s glory days of the ’80s.

The stage was a playground for Peter Garrett. His famously unique jolts and expressive quirks moved across every inch of the stage.

For Midnight Oil, it felt like we, as the audience, were old friends catching up for the last time. All of us in unison were in awe of the band’s history and it seemed like the responsibility was passed to us to carry on everything that Midnight Oil is and was.

The music was peppered with powerful messages of empowerment, urging us all to make the effort to reconcile and give back what was taken from the Indigenous people of Australia. For some, the politics may have detracted from the music but when you look at Midnight Oil’s body of work and what they stand for as a band, in this show, they were inextricably entwined, each adding power to the other.

There were beautiful moments, such as witnessing the genuine brotherhood and camaraderie within the band.

In Kosciusko, drummer Rob Hirst stepped forward to lead the band alongside Martin Rotsey and Jim Moginie. A touching moment of men that have spent decades together, arms around each other, united in song.

This brings us to the unforgettable songs that questioned our way of life, our mistakes as a country and the norms that the band encouraged us to move away from. While the messages within these songs remain as powerful as the day they were written, it was the music itself that elevated the crowd to fever pitch levels of excitement.

The setlist covered every triumph of their catalogue, including the songs from 2020’s celebrated The Makarrata Project and the live debut of the tracks from the new album Resist.

The climax of the show played out with Power and the Passion, Blue Sky Mine, Beds Are Burning and Forgotten Years, transporting us all to the times when the music of Midnight Oil bellowed for change and inspired the world.

The final tour from Midnight Oil marks an acknowledgement of the impact their music has made and, in doing so, reinforces the urgency of activism. It was both a call to arms and a message of encouragement, empowering us all to carry on living out the messages held within their songs.

For this reviewer, this night was transformative. From moments of curiosity and adulation to moments of delight and utter exhilaration. There was a genuine change within that will resonate for years to come. To witness this moment in history was something very special indeed.