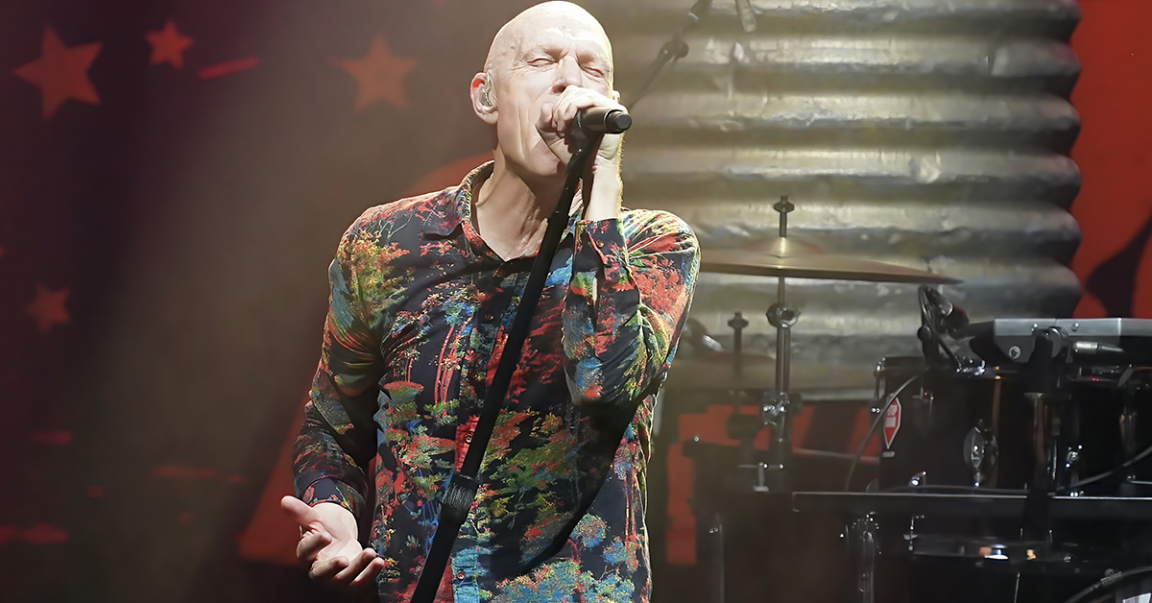 They say music can be healing, that it bonds people together in solidarity with a cause. And when Midnight Oil blazed their trail to the Hope Estate stage on Saturday night, they brought with them a sense of healing, solidarity and hope for a united Australia.

It seems a tall order for one band to bring all those things from just one performance, but to think that would be to underestimate the power and the passion of this iconic Australian band, and the loyalty and love they have from their committed supporters.

Not just a rock band, Midnight Oil has a kind of punk ethos and foundation as fighters for social justice. In particular, they have committed a large chunk of their multi-decadal career to shine a light on the dark corners of Australia’s past, our current social and political climate, and have supported reconciliation and rightful acknowledgement of our country’s First Nation’s People in our Constitution and on the national stage.

These purposes are at the heart of the Makarrata Project, a collaboration between Midnight Oil and some of Australia’s established and emerging Indigenous artists. The Markarrata Project Live seeks to elevate The Uluru Statement from the Heart, which calls for a Makarrata – or ‘truth telling’ – to account for the theft of lands and the displacement of First Nations People.

Midnight Oil created the Makarrata Project mini-album, their first recording in more than 20 years, in collaboration with Indigenous artists including Dan Sultan and Jessica Mauboy to continue recognition of the Uluru Statement of the Heart. All proceeds raised from album sales have gone to supporting organisations that are campaigning for a Markarrata Commission and the recognition of the Uluru Statement.

The show was a very fitting return for gigs at Hope Estate, as thousands came together within the restrictions of the ‘new normal’ with a sense of hope, passion, resolve and desire for truth-telling. And the Markarrata Project Live line-up delivered on this expectation and more.

Alice Skye opened the event to a hopeful crowd, who seemed to be taking their time to warm-up to the idea of how to be together again en masse, after months of isolation from gig culture.

Australian country music icon Troy Cassar-Daley stoked the crowd, playing songs from his forthcoming album, The World Today, which lands on March 19, 2021. The stand-out tracks of the set were Back on Country, Freedom Ride, Take A Walk in My Country and the hauntingly emotive Shadows on the Hill. It’s no wonder that Cassar-Daley has such a devout following that crosses communities.

Before Midnight Oil took to the Hope Estate stage an Elder of the Wonnarua Nation delivered a moving Welcome to Country and sang a corroboree song in language, and asked the audience to pay a minute silence for an Elder and Mushroom Records trailblazer, Michael Gudinski, who recently passed away, before asking the packed crowd to join a call-and-response style Acknowledgment of Country, also in language. It was a powerful moment.

Then it was time for Midnight Oil, a band that is renowned for delivering powerhouse performances of consummate musicianship and conviction of purpose. The icons of Australian music, lived up to this expectation, delivering a set that included songs from the Markarrata Project mini-album and songs of reconciliation from their back catalogue.

“We’re here to play music that makes up an important part of our creative processes as a band and to celebrate the creative relationship that we have with Aboriginal and Torres Strait Islander people,” frontman Peter Garret said to the entranced audience.

“It’s incredible that at a rock show you have so many people being respectful and listening to the Welcome to Country and committing to the Acknowledgement to Country. We want to thank you all for the level of respect that you have shown.”

It was an incredible light show and the videos that played on the big screens on each side of the stage informed the audience of the history of Australia and the story of our land from a First Nations people’s perspective.

The concept of unity was a thread to the whole event, with collaborations from Dan Sultan (Welcome to Gadagil Land and Change the Date) emerging hip hop artist Tasman Keith (First Nation). Gurrumul’s voice was also added posthumously to the performance of Change the Date, while Alice Skye performed an atmospheric and thought-provoking version of Terror Australia with Oil’s Jim Moginie.

Highlights from the Oil’s back catalogue included Best of Both Worlds, a stylised version of Short Memory – including a rap breakdown from Garret, and Truganini. The crowd found it hard to stay in their seats for Blue Sky Mine and the last song before the encoure, a rousing version of Power and the Passion.

The band paid a moving tribute to their bandmate and “the bass player with the beautiful voice” Bones Hillman who passed away in 2020, before playing an incredible version of Kosciuszko driven by drummer Rob Hirst on vocals and percussion of all shapes and sizes.

The Oils finished up the show with an encore including an emotive version of One Country, a powerful The Dead Heart and Beds are Burning, accompanied by a full state of all their talented collaborators.

If was a performance that won’t quickly be forgotten by the impassioned crowd, and not just for it being a first time back to a concert of this size for most punters, but because of the sense of unity that was fostered on that night. That’s the true power of music and performance. Let’s hope we are always as united.