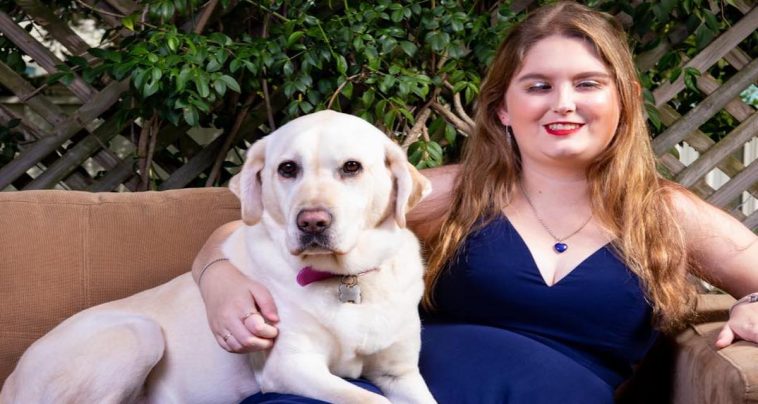 When the anticipated Chess: The Musical kicks off this week, the Civic Theatre stage will be chock full of amazing local and interstate talent.

They, in turn will be backed up by an ensemble of 16 actors/vocalists, 10 dancers, a 33-piece orchestra, and a 70-voice chior.

Oh, and one Golden Labrador!

Six-year-old Violet won’t be performing in the show, however, but rather accompanying best mate and 21-year-old choir member Kirsten Busby.

Kirsten has been visually impaired since birth, but that hasn’t stopped her pursuing her passion for musical theatre, jumping at the chance to audition for the choir after a social media call out.

“I love performing and, when I was at school in Canberra, was in the core cast or ensemble for a number of musical theatre productions,” Kirsten said.

“I figured if I sign up to be part of the choir this time and show them what I can do, perhaps next time I’ll get offered a role in the cast.”

Chess producer Daniel Stoddart is working closely with the Civic Theatre technical team to ensure all is in order for Violet’s debut appearance at the grand theatre and last week, Kirsten, Violet and a representative from Vision Australia undertook an orientation of backstage and onstage to make sure all runs smoothly for the show’s four performances.

Kirsten added that the most challenging part of the production had been mastering the complex score.

“Some composers are predictable, you can easily see where they will take a piece. Benny, Bjorn and Tim Rice certainly don’t fall into that category,” she said.

“We had to send the score to Vision Australia to have it brailed and it’s taken a lot of hours to learn.”

While Violet will not be belting out any tunes this time around, Kirsten said that her four-legged friend had proved to be her harshest critic.

“She sleeps through most rehearsals but if you happen to hit a wrong note, she’ll wake up and give you a look, as if to say: ‘What was that?'” Kirsten laughed.