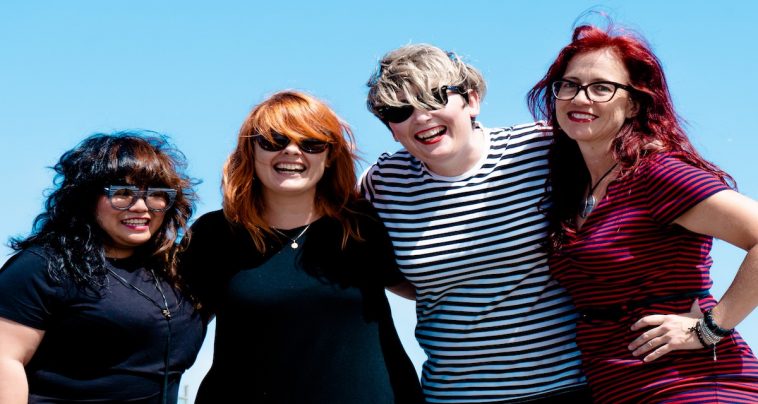 If you’ve ever seen riotous Newcastle four-piece Bitchcraft in action, you’d know that they are not a band that is afraid of putting on a show.

In fact, to say that their punk-rock/riot grrrl energy was infectious would be an understatement.

Well, Bitchcraft have managed to capture that lightning in a bottle their debut vinyl release – a 7″ slab featuring two banging tracks, He’s Not Okay and Hot Socialist.

Speaking to Newcastle Live guitarist Kylie Rowsell said the tracks, recorded at Sawtooth Studios had been in the can for some time, however like it’s doing to most facets of life at the moment, COVID-19 put a bit of a spanner in the works.

However, Adrian Bull from Newcastle-based label Backyard Grill Records felt he couldn’t keep this one under wraps any longer.

“It took a while to get a test pressing because of COVID-19 but like a lot of us Adrian, not knowing how the world was going to turn, put a hold on it but a few weeks ago he just said ‘bugger it, I’m just going to release it on July 17,” Kylie said.

Guitarist Kate Adamson, who joined the band in 2018 after a bit of a hiatus, added that, given the amount of time she’d spent away from the studio, the recording sessions were an absolute joy.

“For me to be recording, it has been a long time between drinks,” Kate said. “Being invited into Bitchcraft was kinda cool so recording was lots of fun.

“As far as the music writing goes, I feel like I’m a bit of an observer. These chicks are really clever. They’ve been hanging out for years writing tunes and then I kind of come in and do a bit of a twiddle at the end and a bit of singing. But I feel the girls are rock solid with their writing. It’s so good to see and be a part of.”

There’s no doubt that the visceral energy that is always present at a Bitchcraft show is more than evident on these tracks, but was that a difficult feat to achieve?

“It’s different,” drummer Janice Escano said. “When we’re playing live, you’ve got everyone there and you kind of take on that energy but in the studio, you’ve got to feed off each other which is different, but still great.

“These days, for me at least, it’s more about making music for myself and not trying to please others has become a huge part of Bitchcraft,”

While the band has never been one to shy away from wearing its socio-political heart on its sleeve, vocalist/bass player Simone Price said the approach had changed somewhat in Bitchcraft 2.0

“These days, for me at least, it’s more about making music for myself and not trying to please others has become a huge part of Bitchcraft,” she said.

“Because sometimes you feel, when you’re younger, you have to create this persona so you fit into a category. And it [Newcastle music scene] was a bit of a sausage fest so I found myself creating this persona to fit in with boys and now I’m older, I feel like I don;t have to do that anymore. It’s an interesting onion to unpack.”

Kylie added: “Back then we were trying to be stridently feminist but I think that actually now our feminism is much stronger but it doesn’t hit like the sledgehammer we tried to make it back then.

“I feel much more confident in my feminism than I did back then.”

The He’s Not Okay/Hot Socialist 7″ is out through Backyard Grill Records on Friday 17 July. Head to the Bitchcraft Facebook page for more info on how to nab yourself a copy.