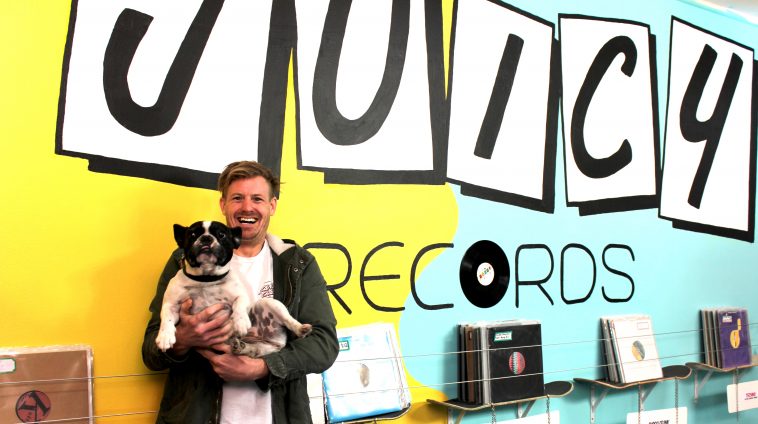 When COVID restrictions cutting a swathe through the global live music industry in 2020, the party ground to a halt for Jackson Blanch.

Jackson, who had been running successful club nights preaching the gospel of house music under the moniker Bump, suddenly found himself without an income and at a complete loss for a place to channel his considerable artistic energies.

With necessity being the mother of invention, Jackson thought outside the box, combining his love of house music, vinyl, coffee, art and good vibes to create the latest addition to Darby Street, Juicy Records.

Inspired by previous efforts to meld cafe vibes with music culture such as the former Glazed Doughnut Bar on Union Street, Jackson told Newcastle Live that he felt 2021 was the right time to take the Juicy Records plunge.

“When COVID hit, a lot of artists were out of work and I found myself out of work for the first time in 17 years which gave me some time to work on producing and cultivating this idea,” Jackson said.

“I had the idea for Juicy back in 2018 and when Glazed opened up I thought it was a top idea but it maybe didn’t have the variety of house music – I’m talking from ’80s funk disco to the later techno, electro, breaks and everything in between – so I thought to myself, ‘I’m turning 30, so why not?’ I’ve always believed in the saying ‘don’t die wondering.'”

With the concept and space at the former Natural Tucker site locked in, Jackson set about enlisting pretty much all of his friends to bring Juicy Records to life, including Newcastle artist Dan Bianco whose jaw-dropping mural of UK house pioneer Carl Cox takes pride of place in the funky, colourful space.

While house and techno are definitely high on the agenda at Juicy Records, Jackson said he envisaged a space that is more a cultural hub that showcases the depth of creative talent we have here in Newcastle.

“I’m all about bringing in awesome hard-to-find new music from places like Berlin that I go an crazy searches to get as well as supporting local artists,” Jackson said.

“I also want to start running live gigs here as well and I’m in the process of starting a comedy night, too. Also, this week, I’ve started running one-on-one DJ lessons this week to introduce people to the wonderful world of vinyl.

It’s not all about the music, either, with Juicy Records offering awesome coffee made with Di Stefano beans and an array of juices and smoothies to keep that energy up as you get lost in the get down.

There are also plans in the works to introduce things like toasties and soups as the months get colder. Giving people another reason to while away a bit of time in the colourful space.

You can also try before they buy, with Juicy Records offering listening bays for punters to get an earful of their potential purchases, and budding turntablists can also browse a selection of Bluetooth record players.

Or, if none of that is your bag, you can just grab a coffee, play some Mario Kart, soak up those sweet, chilled vibes and listen to Jackson enthusiastically wax lyrical about his favourite releases.

“A lot of good energy has walked through the doors,” he said.

“I’ve got an awesome team and a whole bunch of my mates have really stuck their neck out to help get this thing off the ground and at the end of the day Juicy Records is very much focussed on music, art and good vibes.

“I get a smile walking in here every day and I hope others do too.”