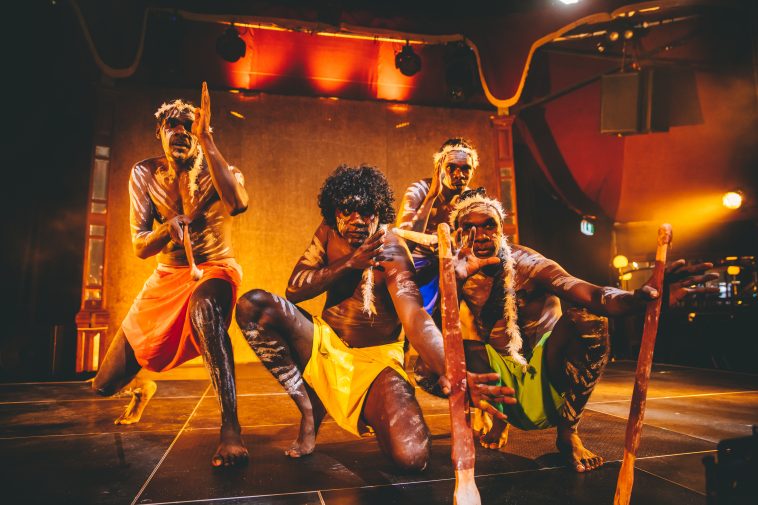 If there was one thing Baykali Ganambarr, lead dancer with Indigenous dance sensation Djuki Mala, wants people to take away from their upcoming performances at Spiegeltent Newcastle, it’s a smile from ear to ear.

“We all just want people to leave happy with big smiles and a feeling of love and togetherness,” Baykali told Newcastle Live.

“Our show is a little bit like a time machine,” Baykali added. ‘We go right back to 60,000 years ago right through to contemporary dance styles like hip-hop.

“Our show tells the genesis of Djuki Mala, in a way that challenges the western anthropological view of First Nations culture. We do this with our humor, our dance, our story, and our culture. It’s alive, it’s living, breathing, ever changing and evolving.”

Djuki Mala started life in 2007 when a group of young dancers from Elcho Island in North East Arnhem Land uploaded their interpretation of Zorba The Greek to YouTube – which generated an impressive 2.9 million views.

The ensuing years have seen Djuki Mala take their show, which has been described as “like a confetti cannon point blank to the heart”, to 27 countries – with five-star reviews being the norm.

Djuki Mala also made an appearance in Mojo Juju’s award-winning video for her track Native Tongues.

Aside from setting the world on fire with Djuki Mala, Baykali is also making great strides in the acting world.

The burgeoning thespian picked up a Best new Talent nod at the Venice International Film Festival for his big screen debut in Jennifer Kent’s [The Babadook] The Nightingale, joining such auspicious company as Jeniffer Lawrence and Mila Kunis.

“I still can’t believe it,” Baykali admitted. “Here I am, all the way from Arnhem Land, and I’m hanging around with people like Naomi Watts and Willem Dafoe – it’s a really amazing feeling.”