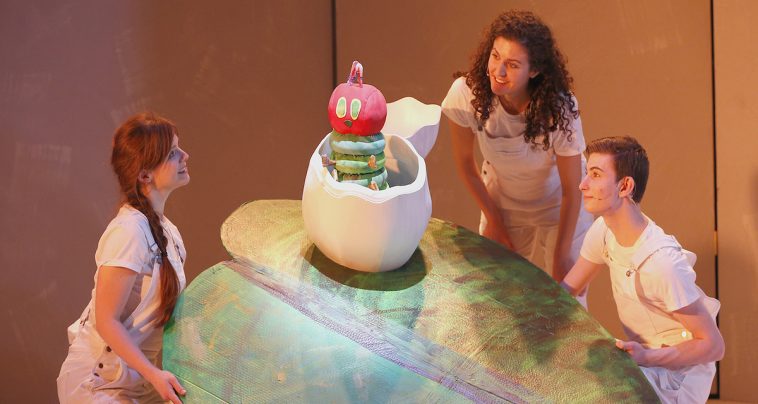 It’s one of the most iconic and best-loved children’s stories of all time.

And, just in time for the school holidays, Eric Carle’s The Very Hungry Caterpillar Show will emerge from the page and onto the stage at Cessnock Performing Arts Centre for two shows on Wednesday 14 April.

The brainchild of Jonathan Rockerfeller, the critically acclaimed production is brought to life with a menagerie of 75 loveable puppets and will also adapt a number of the author’s stories including Brown Bear, Brown Bear What Do You See? The Very Busy Spider, Ten Little Rubber Ducks and, of course, the star of the show – one ravenous caterpillar!

The team behind the Australian tours of The Gruffalo, Spot, and The 13, 26, 52, 78 & 91-Storey Treehouses will excite, educate and entertain new readers and first-time theatre-goers, while those who grew up with these books will delight in this colourful walk down memory lane.

Eric Carle has illustrated more than seventy books, many best sellers, most of which he also wrote, and more than 132 million copies of his books have sold around the world.

His best-known work, The Very Hungry Caterpillar, has nibbled its way into the hearts of literally millions of children all over the world and has been translated into 62 languages and sold over 45 million copies.

“It is uplifting to see such beautiful and cheerful works inspired by my characters! I hope my books – and this show – will inspire you and your imagination,” he said.

The Very Hungry Caterpillar Show is on at Cessnock Performing Arts Centre on Wednesday 14 April (10am and 2pm) Head here for tickets and more information.