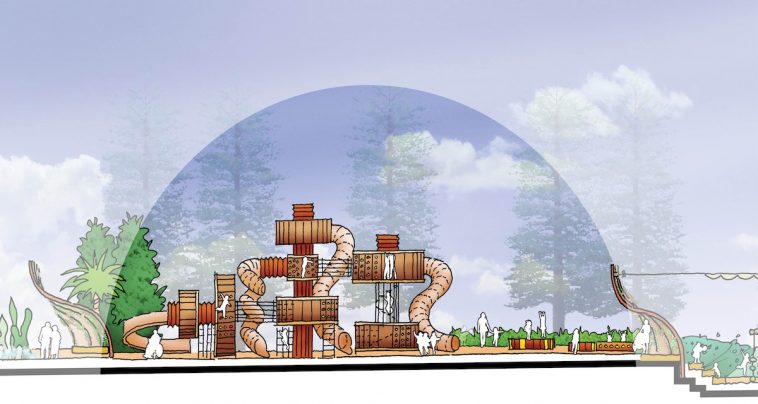 With Newcastle’s Foreshore Park set to undergo a major upgrade, City Of Newcastle want your opinions on the new design concept for the picturesque community space.

Developed throughout 2020 with close community consultation, the design concept includes a fenced, regional-level inclusive playground equivalent in size to eight basketball courts and a water play space that links back to Newcastle’s Indigenous heritage.

Designed to also allow for the hosting of major events in the city centre, the draft concept also includes space for community gardens and inclusive ‘Variety Livvi’s Playspace’ a centrepiece of the design delivered in partnership with Variety the Children’s Charity.

Another feature of the preliminary concept for Foreshore Park is the inclusive ‘Variety Livvi’s Place’ playspace which is being delivered in partnership with Variety the Children’s Charity.

The design also includes a cultural heritage walk that provides the opportunities to tell Awabakal stories like Mulubinba, the place of many sea ferns, Awabakal canoe hunting on the harbour, as well as recognising post-1880 stories and the redevelopment of Newcastle as we know it.

“Now more than ever, we value our open spaces and parks, and this project is a great collaboration between City of Newcastle, Variety the Children’s Charity and our community which will transform the Harbour Foreshore into a more inviting recreational space and major event venue for everyone to enjoy,” Lord Mayor Nuatali Nelmes said.

“We have consulted with our Indigenous stakeholders on the key heritage elements of the concept including the removal of the Frog Pond and provision of an exciting water play area linked to our heritage.”

The addition of the new cultural elements at Foreshore Park was strongly supported by Luke Russell from Guraki Aboriginal Advisory Committee.

“I’m really pleased there is a significant increase in the representation of Guuri culture in the Foreshore Park concept with the plan reflecting equal parts Aboriginal and non-Aboriginal heritage. City of Newcastle’s engagement on this project has resulted in a positive outcome for the community,” he said.

Community engagement is open until Friday 26 February. People can view the concept and have their say here