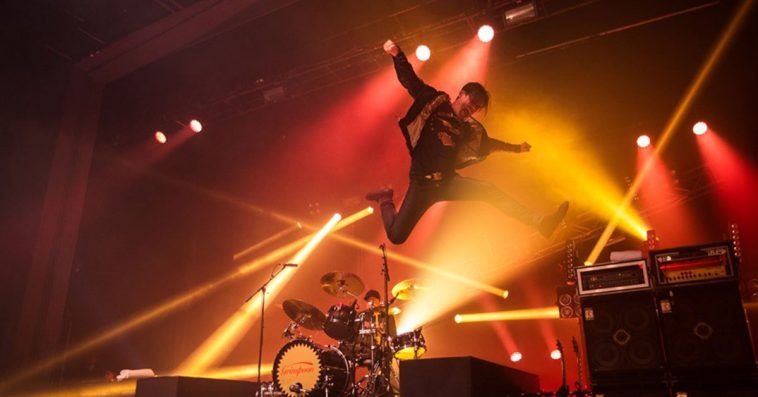 They have been cutting a swathe through the Oz touring circuit over the last month with their mammoth Chemical Hearts tour.

And now Grinspoon have their sights set firmly on Newcastle, with their Entertainment Centre show literally just around the corner.

A bit of a walk down memory lane, this tour will see Grinspoon revisit all of the hits and audience faves that made them one of the favourites of the festival circuit as well as deeper cuts from their seven-album discography.

We here at Newcastle Live have been getting pretty excited about seeing the Grinners in full flight at the Ent Cent and we want to infect you with that unbridled enthusiasm for Phil Jamieson and the boys.

In that spirit, here are five JUST ACE reasons to check out Grinspon when they hit town on November 1.

It’ll be a great rockshow

Grinspoon cut their teeth on the fecund festival scene of the 1990s and of the crop of Aussie fest faves of the day, these guys were at the top of the tree.

Thanks to a heavy selection of summer-friendly bangers and Phil Jamieson’s brash rock and roll swagger, Grinspoon quite rightly earned their place as one of the best live bands of the era.

Also, anyone who has caught the Grinners recently will attest, these guys still go awwwffff, maaaaate!

Part of the reason music holds a special place in our hearts is the sense memories it creates when we listen to a fave track.

And Girnspoon certainly fall into that category and this writer remembers with crystal clarity dancing around like a dickhead at the 2000 Big Day Out to Just Ace and DC X3.

And now you can look back on your salad days with joyous abandon as Phil and the boys fill your ears with the soundtrack of your yoof!

Sure, Grinspoon are going to blow the doors off the Entertainment Centre come November 1 but they will also have some heavy hitters helping with the huffing and puffing.

Reading like a mini-festival, this line-up is one for the ages.

Adelaide duo The Hard Aches have been winning hearts and minds across the country with their melodic, driven brand of neo punk and their latest single Wasted looks set to continue that trajectory.

While their name may sound a little ‘annoying’ apparently Brisbane three-piece bugs are anything but.

They are described as a lighthearted group of mates who find joy in crafting infectiously happy pop music, and packaging it up with a dose of honest and relatable songwriting. Check out their latest release Self Help and tell us we’re wrong. we dare ya.

Last, but certainly not least is no foolin’ Newy legends The Gooch Palms. The fuzzed-out duo have been pricking up ears all over the shop of late and if you’ve heard their latest album III you’d know you’re always in for a good time when the Goochies are on the bill.

Oh, and they go off live, too!

So, there you have it. What are you waiting for? Go and get tour ticket NOW and get ready for what is shaping up to be one of the best gigs of the year!

Catch Grinspoon at the Newcastle Entertainment Centre on Friday 1 November. get your tickets here.