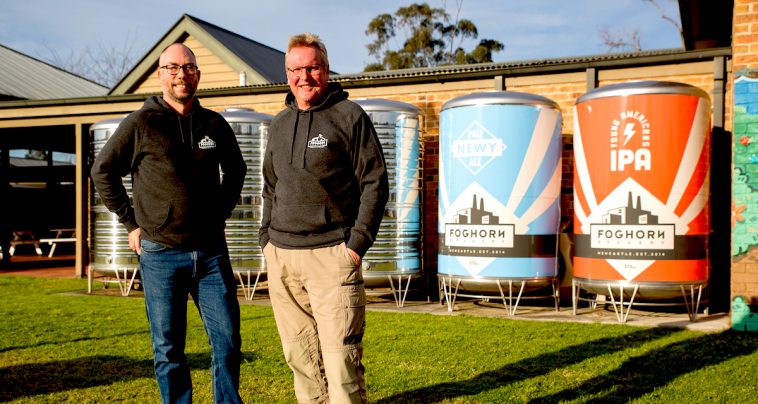 The brewery is currently transforming the existing Hunter Beer Co (HBC) at Potters Hotel in Pokolbin, in what is great news for Hunter Valley amber ale enthusiasts.

FogHorn founder and chief brewing officer Shawn Sherlock, who has 20 years of beer boffinry behind him, said he was excited at the prospects the new site presents.

“When the opportunity to expand further into the region arose, it just made sense,” he said.

“It’s something that the Hunter Valley has been calling for – the site is perfect for us to grow our brand and brewing capabilities.”

To make things even more appealing master brewers Keith Grice and Daniel Gayner from HBC have joined the FogHorn team and the venue will continue to serve HBC’s best-loved brews including the Hunter Kolsch, Bock and the legendary brown ale Slaked Magpie.

The new and improved brewery will also be home to FogHorn’s flagships including the Young Americans IPA, Newy Pale Ale and Sligo Extra Stout – not to mention its vast array of seasonal brews and limited editions.

Having recently completed a mural at Rutherford’s Bradford Hotel, Newcastle artist Mitch Revs has also added his unique style to the venue’s vibe, creating a visual love letter to craft beer and the Hunter Valley on the brewery’s exterior wall.

Since first opening it’s Newcastle doors back in 2014, FogHorn has gone from strength to strength, earning a reputation as one of the go-to craft beer haunts in Newcastle before a recent partnership with investors Founders First saw the brewery move into wholesale production.

“We are proud to be partnering with Shawn to extend the reach of FogHorn and accelerate business growth – with FogHorn having its biggest ever month in July from a wholesale perspective,” he said.

“The Greater Hunter region is one of Australia’s most visited and iconic food and wine destinations. We have some exciting plans ahead for Potters Hotel, creating a community hub that showcases FogHorn and our award-winning Australian beer and spirits portfolio which includes KIS, Jetty Road and Sparkke.”

The recently renovated Potters Hotel has just welcomed a new chef and a new menu will be announced soon.