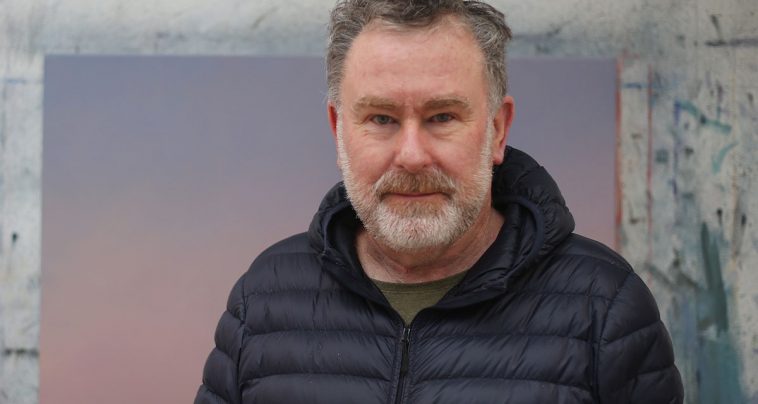 This is the third time, thanks to Covid postponements, that John has tried to exhibit his series of atmospheric paintings of the Hawkesbury River landscape.

Many of the works on show in Fleeting were produced at the Milson’s Passage home of a couple who purchased work at his John’s 2020 show.

The couple offered Morris the use of their home and he took the opportunity to embrace the small, isolated community, hiring a dinghy and exploring hard-to-reach places including Bar Island, where he found the ruins of a chapel and the graveyard of early white settlers.

What came from that trip was a subtle study in light and shade with a haunting, ephemeral beauty that reveals itself slowly, marking the passage of time and evoking an emotional response.

“I was struck by the ephemeral nature of what I was seeing. One minute it was there and the next, it was gone. It was etched in my consciousness, and I became obsessed with capturing these moments in time, their transience and precariousness,” John Said.

“In this show I focused on the water surface, not so much the bigger spaces, escarpments and plateau, but fell into concentrating on the reflections, tides and mist of the river.

“There’s a lot of play between light and dark, luminosity and shadow both with paint and the emotive themes in the works. Reading Kate Grenville’s novel Secret River or Grace Karskens’ People of the River has set a focused lens through which we can view the Hawkesbury River and its colonial and Darug past. I am hopeful that the emotive tonality of the exhibition gives an indication to this history.”

Earlier this year, Morris was caught up in the Wickham warehouse fires and the resulting asbestos contamination, with his home and studio being affected, which severely delayed the flow of his work. After deep cleaning and much time had elapsed, the artist was just getting back into his groove when a fall from a bicycle landed him in hospital for surgery on his painting arm.

“I was feeling like life was back to normal. I’d been working on a piece and wanted to check the light and colours at Nobby’s Beach. I was feeling quite joyful until I fell.”

Fleeting is on show at The Owens Collective from 1 July with the opening event on Saturday, 2 July at 6 pm. For more information, including a catalogue and pricing, visit johnmorrisartist.com.au.