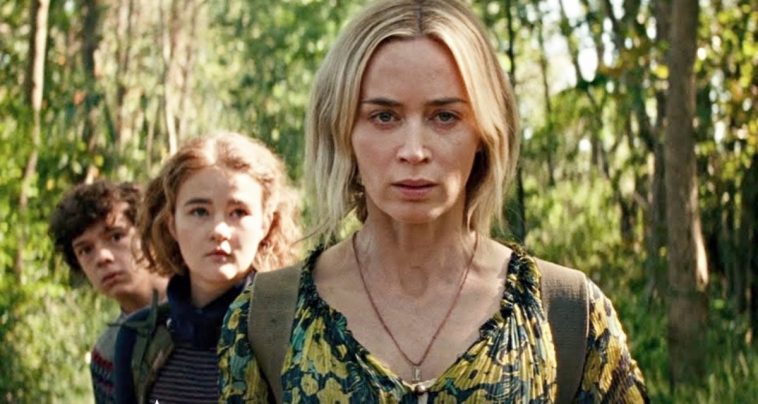 A Quiet Place Part II is the sequel to the 2018 sleeper hit of the same name. And you should watch the first one, if you haven’t already done so, to make sense of this quiet world where alien creatures, super sensitive to sound, have ravaged the planet and killed most of the population.

The sequel picks up just moments after the first movie ends, but not before it spends a few minutes giving us a little more information about what happened on the day that changed the world.

Similar to the first few minutes in Jaws, we have a glimpse of small-town life. Slow-moving, peaceful and safe. But that changes in an instant when people start screaming and fleeing for their lives.

We find Evelyn (Blunt) unexpectedly on the move with her teenage children Regan (Simmonds) and Marcus (Jupe) and newborn baby.

Limping and wounded, she walks her family into the unknown. It’s not long before the realities of life away from the safe haven of the family farm begin to become apparent.

A Quiet Place Part II is one of the better sequels to have been filmed. While it lacks the unknown and slow unraveling of the first movie, the family unit is still at the heart of this tale.

Changing dynamics and the discovery of a possible weapon to defeat, or at least slow down the alien creatures, brings a new sense of unease to the movie.

Blunt, as the family matriarch, might be front and center, but she hands over the true starring role to her sassy, defiant, and unbelievably brave daughter Regan, played by the fabulous Millicent Simmonds.

Deaf in real life, she brings authenticity to her role and her onscreen family. And much as she does onscreen, she eases you into this new world of silence. Something tells me director John Krasinski would have taken cues and allowed a natural character development for Regan, guided by this young actress.

That the family already communicate using sign language plugs up a lot of potential plot holes that could possibly be used to explain away certain events. Further evidence of a strong, well-written script and the tight direction that results in a movie sequel that could take on its predecessor if it had to.

This movie is worth the ticket price and, with rumours of a part three already being whispered about on the internet, a franchise could be in the making.

In the safe hands of Krasinski, there’s no doubt this quiet world, along with its fiery young star, has the potential to become one of the greats.