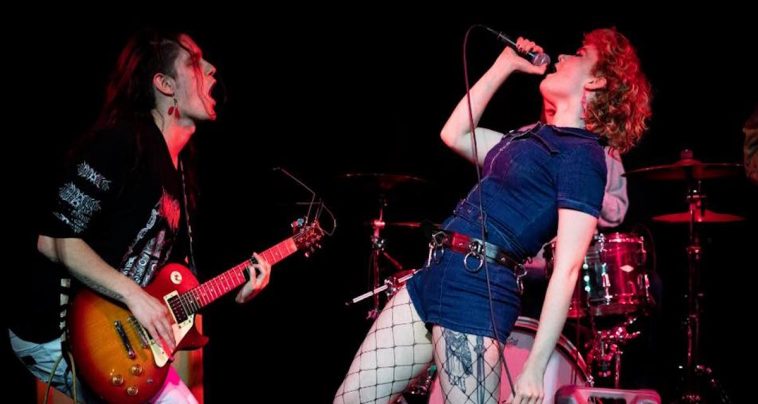 We’ve said it before, we’ll say it again, and we’ll keep saying it until the cows come home. We are spoiled, here in Newcastle, when it comes to top-quality music.

And with the likes of Fritz, Grace Turner, Amy Vee, Paris Grace, Viragos, Boycott, and Catherine Britt (to name but a mere few) all calling our neck of the woods home, there’s no denying that rock and roll in Newcastle is in no way just a domain of the dudes.

So, in the spirit of International Women’s Day, here are just a few more female-focused local artists that we reckon deserve your love not just on March 8 but every day of the year!

Big hair. Big riffs. Big personalities. Newcastle rock behemoth Hot Flush have all all three , in spades, and they aren’t afraid to tell you all about it.

Displaying more femme rock swagger than Lita Ford ripping into a Runaways cover at Suzi Quatro’s birthday party, Hot Flush has basically blown the doors off Newcastle with a raft of mammoth singles including Legwarmers, Big Hair, Rock Attack, and Hot Flush, and we here at Newcastle Live can’t wait for their next slice of rock and roll awesomeness.

While we’ve yet to be treated to a live outing from this rockin‘ four-piece, the clip for the latest single Cheap Love features members Suzie Prezie, Lozzie, and Jo Jo ripping it up on what looks to be the Gallipoli Legion Club so, we can live in hope.

This Newy four-piece take their name from the Celtic queen of the Iceni tribe who led an uprising against the conquering Roman forces in 60AD Britain.

And that should give you a pretty fair indication that Boudicca is a band that is not all that fond of taking or putting up with any of your shit.

If you like your punk rock crusty, loud, and uncompromising then you NEED you to get yourself to a Boudicca show because they are among the best of their ilk – not just in Newcastle but in all of Oz.

Oh, and they also put on one hell of a live show, too!

Taking cues from the likes of punk rock legends X-Ray Spex and The Slits, riot grrrl awesomeness of Bikini Kill and Bratmobile and the socio-political angular indie of Sleater Kinney, Newcastle’s very own ladies of loud definitely deserve your attention.

Not afraid to wear their feminism proudly on their sleeves, Bitchcraft are all about tunes dealing with revenge, predatory dudes and regretful relationships – all wrapped up in a dance-til-you-sweat f-you party attitude.

Their latest double A-side vinyl single He’s Not OK/Hot Socialist sold out in mere nanoseconds so it would definitely behoove you to get on board the Bitchcraft bandwagon to see what all the fus is about.

From the sweetly lilting folk of Precious Things To Me and the upbeat Rather Be Your Lover (Than Your Wife) to the haunting and ethereal La Sorcière 2020 proved to be prolific for the songwriter who is gearing up to release her first album in more than a decade.