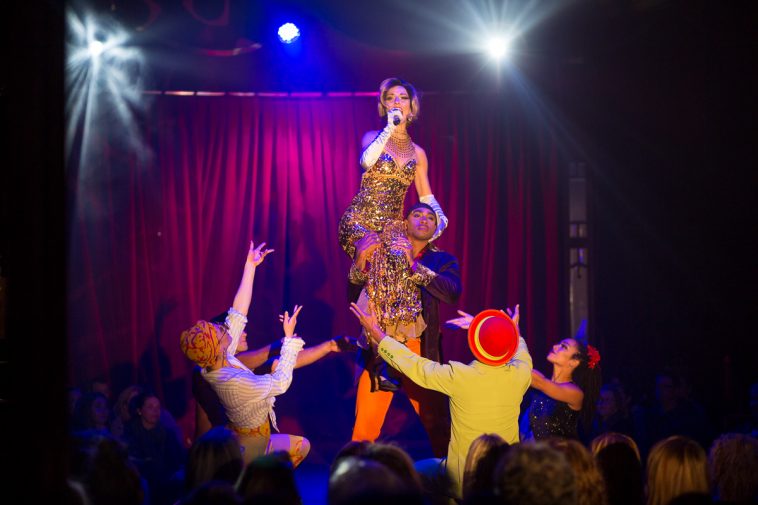 ON POINT: The outrageous and scandalous costumes of Deluxe Deluxe go hand-in-hand with the performances themselves, one wouldn’t be complete without the other. Pictures: Peter Stoop

In the words of Spiegeltent Newcastle, “Deluxe Deluxe is set to descend on the shimmering Spiegeltent for an evening beyond your wildest imagination.” And let me tell you, it did not disappoint!

The outrageous and scandalous costumes of the evening go hand-in-hand with the
performances themselves, one wouldn’t be complete without the other.

Due to the freezing nighttime weather Newcastle is currently experiencing, audience members were rugged up in their coats and scarves when I checked out Deluxe Deluxe on Tuesday. Many even pulling out their winter gloves and beanies for the occasion!

However, once you entered the Spiegeltent things really started to heat up. The circus and cabaret worlds are alike, eye-catching and dramatic costumes play a massive role in capturing an audience’s attention.

However, in Deluxe Deluxe a perfect combination of these two worlds combine creating something even more dazzling and daring.

The host and lead singer of the night, Amy G had many costume changes throughout the show. A phrase that suits the costumes perfectly is one Amy used multiple times, and that is “too much is never enough!”

The main theme that tied all of her looks together is sparkle! The Oliver Award-winning performer wore gowns of sequin that reflected off every mirror around the Spiegeltent, switched up her hairstyle upwards of five times and even closed the show in a 1970’s Cher inspired multi-coloured unitard.

The first thing that caught my eye that night was the stunning gold gown that opened the show, it’s beauty and ability to reflect light in the most magical way, has left an impact on me.

It’s incredible that a circus/cabaret performance is able to have such an immense impact, that fits seamlessly with the enjoyment and playfulness of the evening.

Amy’s fashion choices of the night were incredibly important because they represent and work with the song or skit she performs. In one moment while talking about her home country, the United States, she wore a Jackie Kennedy suit and skirt combo which worked so well in it’s given context.

As far as the other performers go, in true adult 18+ fashion it was risqué and daring. For practical reasons the ladies doing acrobatics kept clothing to a minimum, yet were sporting elasticised clothing for maximum comfort and little coverage.

The outrageous awards of the night go to Louis Biggs and Busola. Both were incredibly fierce with their fashion, one of the most eye-catching looks being of hot pink, skin-tight lycra… and that’s all I am going to tell you!

While it’s clear the costumes themselves were bold, the people within had to be equally as bold in order to pull it off. And they did this with such confidence and perfection!

On the whole, the costumes of Deluxe Deluxe were bright, exciting, eye-catching, wild and risqué. There was no holding back in regards to fashion risks, which perfectly sums up the performers and the show itself.

Whether it’s the dazzling gowns of Amy G, the seductive costumes of the acrobats or the bold and crazy colours of everyone in-between, there is something for everyone!

Deluxe Deluxe is on at Spiegeltent Newcastle until Sunday 16 June. Get your tickets here.