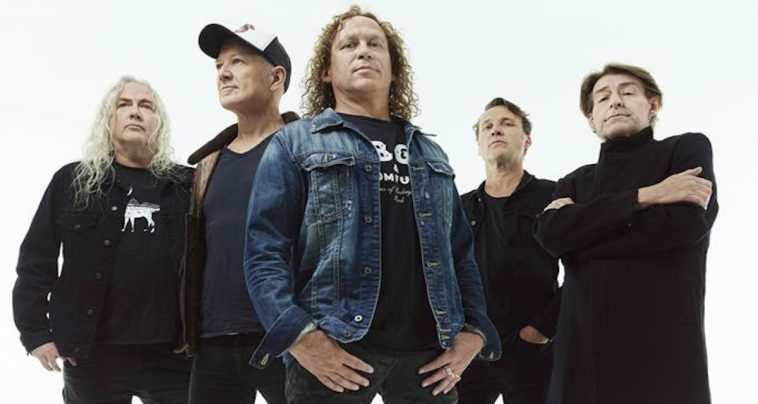 The Screaming Jets will make a welcome return to Belmont 16s this September. Picture: Kane Hibberd.

It might be hard to believe, but the Screaming Jets‘ incendiary rock and roll behemoth of a debut album All For One turns 30 this year!

Yep, that’s right. Feel old yet? Well, never fear because to mark the auspicious occasion, the current Jets lineup – Dave Gleeson, Paul Woseen, Jimi Hocking, Scott Kingman, and Cameron McGlinchey, have headed into the studio with original producer Steve James, to give the celebrated set a fresh coat of paint.

And even better the boys will be making a welcome return to Belmont 16s this September as part of a mammoth national tour.

All For One featured the original classic line-up of Dave Gleeson, Paul Woseen, Grant Walmsley, Brad Heaney, and Richard Lara and sent the Jets into the rock and roll stratophere.

The album, buoyed by such belters as C’mon, Shine On and Stop The World, peaked at number two on the ARIA charts, but it was the anthemic riffage of the second single Better that introduced the band to the world with the Jets, well jetting off to Europe, the UK, and North America on the back of its success.

“For a bloke from Cardiff, who’d spent a few years touring round Australia, to find himself on the other side of the world sharing the stage with the likes of Soundgarden, Pearl Jam, INXS, and yes, even a band room with Spinal Tap was something beyond my wildest imagination,” Dave Gleeson said.

Fast forward 30 years and those sings are still as rocking as ever and despite the re-recording happening under the weight of COVID, the re-visit promises to rock just as hard.

“The plan was always to re-record the album for this milestone. We just didn’t realise we’d be recording under these circumstances,” he said.

“One of the things that we’ve always loved about the recording studio is that it’s a bunch of blokes, locked away in our own world creating and mucking on.  Obviously, that option wasn’t open to us due to COVID, so we had to do it like the kids do.

“Our producer Steve James pulled it all together and because we weren’t messing around with arrangements it all went down very quickly and painlessly.”

The band will be ripping into the album from start to finish at the Belmont 16s show which is more than an exciting prospect, given that it’s been more than 18 months since the lads hit the road.

“It’s nice to revisit some of those songs. A bunch of them we still play live to this day, but during the re-recording of some of the songs we haven’t done for a while – wow, the memories just come flooding back and hopefully it’ll be the same for our loyal fans,” Dave said.

“This tour may even bring people out who haven’t seen us for a while. Maybe there will be people there to judge whether we are the same as 30 years ago. Maybe they’ll think we are better. We haven’t toured together for 18 months – so it’ll be like a rebirth, which could get messy!”

Catch The Screaming Jets at Belmont 16s on Friday 17 September. Get your tickets here. The All For One 30th Anniversary Edition is out Friday 13 August.