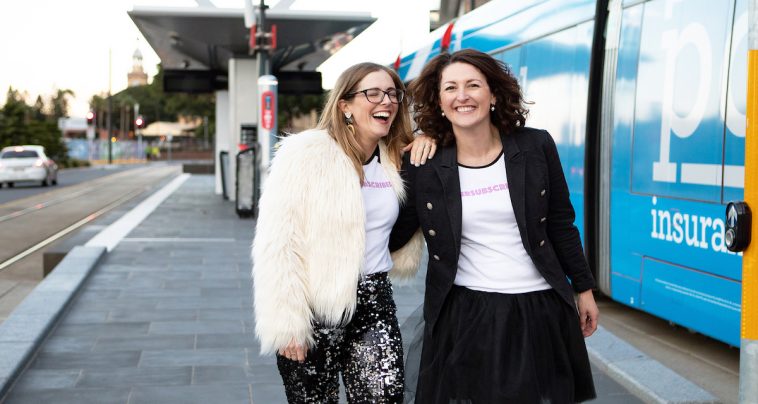 For Laura Jackel and Alana Nixon, the love of a good, old fashioned chin wag has turned into a bit of a consuming passion.

The Newcastle-based duo has just reached the first birthday milestone of their podcast Oversubscribed and the release of its fourth season.

Since kicking off the podcast, which they record at the Newcastle Podcast Studio, back in July last year, Laura and Alana have recorded 30 episodes which have enjoyed almost 18,000 unique downloads from across the globe.

“We started it for fun and just to see what happens and we were just happy to get our first 100 listeners so to reflect on a year of doing this and many more people listening is quite nice,” Laura told Newcastle Live.

With the audience on an upward trajectory it may seem that the podcast’s name could be a nice example of serendipitous irony, Laura said that the title was inspired by the busy lives that she and Alana lead.

“We are both very busy women but we love it that way,” Laura said. “We imagine that our audience is kind of the same way, hence the name.

While Laura added that Oversubscribed was originally tailored to ‘Novocastrian sensibilities’ it turns out their brand of chat has an appeal that extends far beyond our city limits.

“We were looking at a podcast called Shameless which is hosted by two ex journalists in their late 20s,” Laura explained.

“We looked at that and thought: ‘there isn’t really anything like that for women of our age’ – we are both over 40. So we kind of adapted their approach to suit the Newcastle market. For example, their episodes are quite long and ours are 30 minutes because that’s the Newcastle commute, right?

“But we were actually surprised to find that Newcastle is our fourth biggest market.”

Along with their breezy, conversational approach, much of the success of Oversubscribed can be attributed to the inherent honesty in their delivery and their desire to delve into topics normally left to younger creators.

“I feel that sometimes women over 40 can sometimes feel a bit invisible,” Laura said. “I mean, a lot of pop culture media is targeted at a younger generation but we’re still interested in all that stuff.”

While Laura said she and Alana are keen to tackle everything from the latest pop-culture news to the “nightmare that is having young children,” she added that their latest season had taken a slightly different approach.

“We have changed the format for season four,” Laura said. “Previously we were covering evergreen topics – issues that were important to us but not as time specific.

“But this season we are recording weekly so we can be more responsive to what’s happening in the news.”

Laura said that while she and Alana are chuffed with their one year milestone, Oversubscribed barely scratches the surface of brilliant podcasting talent this town has to offer.

“While we are keen to promote what we are doing to local audiences, we also want to highlight the fact that there is a lot of really great content coming out of Newcastle – it’s all right here,” Laura said.

“For example, Mel Histon has a podcast [The Hey Soul Sista Podcast] that is doing really well, and there are just so many more interesting ones out there and in development,” she said.

“It’s a really exciting time to be involved in the industry.”

Oversubscribed is available on Apple Podcasts, Spotify and Castbox FM. Or you can head here for more info.