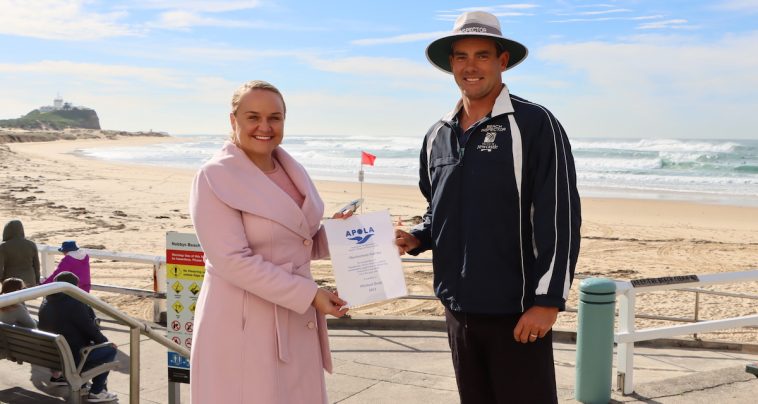 With almost two decades protecting visitors to our beaches under his belt as a City of Newcastle lifeguard, Mick Body knows a thing or two about saving lives.

And that dedication to protecting beachgoers has been recognised by the Australian Professional Ocean Lifeguard Association (APOLA), who awarded Mick the highest accolade in the biz – a Meritorious Service Award.

“It was a surprise, but definitely an honour to be recognised with this award,” Mick said.

One recent example of Mick’s quick thinking occurred back in January when he came to the rescue of an eight-year-old girl.

The youngster was swept, on her body board, out of the Canoe Pool at Newcastle Beach onto the rocks and into the ocean amid a 14-foot swell.

Moving quickly across the tock shelf, Mick dived into the treacherous surf ansd rescued the girl who was struggling to keep her head above water.

Mick and colleague Luke Kelly, held onto the girl and navigated the swell to reunite her with her frantic family on the safety of the shore.

“It’s a real good feeling inside that you’re able to save someone’s life,” Mick said.

“During large swells, waves engulf the Canoe Pool and then bounce off the side of the ocean baths creating a strong side wash which catches people by surprise. I’m pleased our rescue that day avoided an almost certain drowning.”

Lord Mayor Nuatali Nelmes praised Mick’s quick thinking, adding that she was immensely proud of all our City’s lifeguards.

“Our lifeguards provide an absolutely invaluable service to our community and regularly go beyond the call of duty to keep our community safe,” Cr Nelmes said.

“Without Mick’s bravery, advanced skills and knowledge of the beach, the outcome would have certainly been a tragic one.

“I’m proud that this incredible effort has been acknowledged on a national stage and I thank all of our lifeguards for their daily acts of kindness, bravery and courage.”

During large swells, waves engulf the Canoe Pool and then bounce off the side of the ocean baths creating a strong side wash which catches people by surprise. I’m pleased our rescue that day avoided an almost certain drowning.

Each surf season, Newcastle lifeguards save, on average, 100 lives and perform more than 15,000 preventative actions.

“Lifeguards are extremely proactive when it comes to taking preventative measures. This can include asking surfers to surf outside the flagged area to urging beach goers to swim between the red and yellow flags instead of near dangerous rips,” the Lord Mayor said.

City of Newcastle was also recognised by APOLA for continuing to deliver the Water Safety Education Program for young people and our multicultural community during the pandemic – a program that has been running for 52 years.