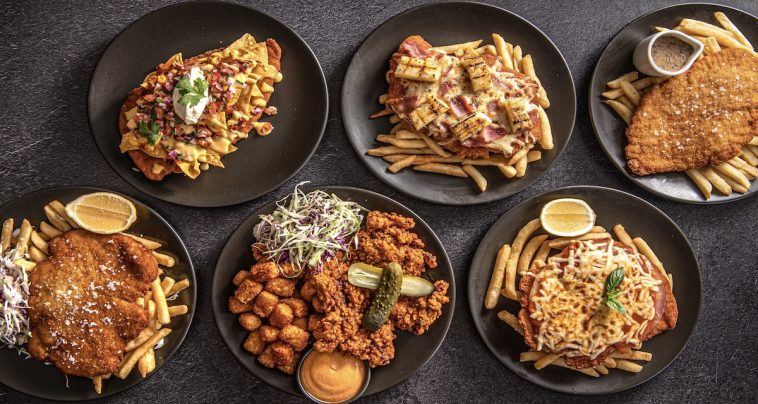 The humble schnitzel. It’s hard to imagine that such a simple looking dish could inspire such a fervent fandom that has seen it appear on pretty much every pub grub menu in the country. Take a bite into one of these golden bad boys, however and it’s another story.

Well the culinary boffins over at The Bavarian know this only too well, having curated a 10-week festival love letter to the iconic dish.

Yep, that’s right. From this week The Bavarian’s Charlestown and East Maitland locations are giving schnitzel fans ten weeks to indulge in a smorgasbord of ten schnitzel variations, which are available from Wednesday, 31 March until Wednesday, 9 June.

Ten incredible flavours have been created by The Bavarian’s accredited schnitzel masters, who hand-make hundreds of schnitzels daily: pounding chicken and pork to mere millimetres thick, dipping in flour and egg, dredging in house-made breadcrumbs, and pan-frying in hot oil until perfectly golden and blistered.

Vegos and vegans are taken care of as well with the Mushroom Parma and the aptly-named The Vegan – potato and mixed veggie schnitzel with green salad and fries.

Oh, and there will also be a $10 “schnitzel blitz” every Wednesday with all ten flavours available during the all-day deal.

Lining up next to the schnitzels are beer paddles showcasing the eatery’s range of eight imported German beer styles, spanning Lowenbrau, Hofbrau, Spaten, Franziskaner and Paulaner that are sure to have you shouting Wunderbar to the heavens.

“Our schnitzels are a perennial favourite on the menu for their generous size, fantastic bread-crumbed crunch and tender meat filling and our schnitzel festival is a homage to this classic Bavarian dish that Australians have made their own,” The Bavarian food and beverage director John Sullivan said.

The Bavarian is located at Charlestown Square and Stockland Green Hills Head here for more information and to book.