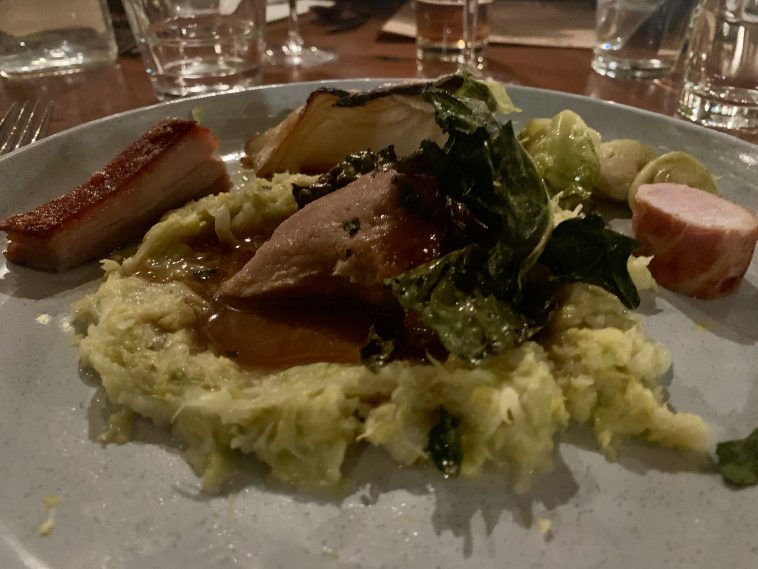 We were lucky enough, last week, to be invited to FogHorn Brewhouse’s latest Paddock to Plate Brewer’s Feast.

The increasingly popular event saw a sold-out crowd of 70 hungry punters eager to be guided by brewer Shawn Sherlock through a mouthwatering menu, paired perfectly with some of FogHorn’s finest beers.

This time around, pork was the highlight of the evening – meat this writer normally steers clear of.

That all changed tonight thanks to the delicious produce sourced from Hunter Valley producer Coquon Farm.

In a nice twist, spent grain from the brewing process at FogHorn is used as part of the pigs’ diet at Coquon Farm and as Shaun told the assembled: “This isn’t like the pork you get at Coles and Woolies.”

On arrival, we were greeted with the perfect palate cleanser – Foghorn’s “Rowdy” Kellerbier – a refreshing German-style summery lager that set the scene well for what was to follow.

Strong flavours were the order of the day right out of the gate with a Fromage de tête. Essentially a terrine made from the head of the pig – again something this writer would normally steer clear of – this dish was a big surprise.

The richness of the Fromage de tête balancing perfectly with a zesty array of pickled vegetables and a ‘zingy’ citrus mustard. These notes were further highlighted by the paired brew – ‘The Rejuvenator’ – a malty lager, again Bavarian-inspired.

After another palate cleanser (phew) this time FogHorn’s salute to the US IPA – “Left Coast” it was on to main which also did not disappoint.

A dish of slow-cooked pork leg, super crispy pork belly, seared tenderloin, fennel, kale and Brussels sprouts could not have been cooked better.

After another palate cleanser (the gold-medal winning Young Americans IPA) we were presented with a petite dessert of a perfectly fluffy profiterole with creme patissiere and, of course maple bacon. Another winning flavour combo underpinned by another winning beer pairing, this time a herbaceous gin botanical spiced saison.

When paired with FogHorn’s gorgeous cellar release Bière de Garde (or ‘beer for keeping’), this main was a porcine triumph.

With notes of juniper and cardamom, this was a brew with a depth of flavour not often found in a beer glass.

Overall, this menu was an absolute delight from start to finish and if you get the chance, make sure you get along to the next Paddock To Plate Brewer’s Feast at FogHorn Brewhouse. You won’t regret it.