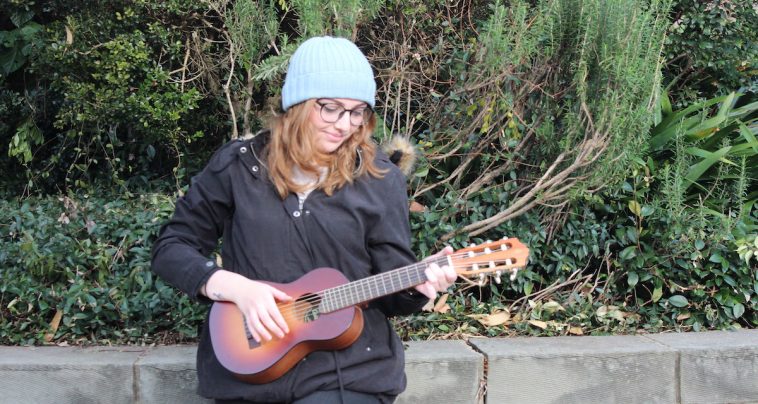 For student Shay Perry, the traditional mode of studying – cloistered away at the library in hushed silence, just wasn’t productive.

So, she decided to do something about it.

Shay, who is in her final year of a Bachelor of Social Science degree at the University of Newcastle, came up with the concept of NUsic as part of her final Human Services assignment.

“NUsic is about having a space where students can go and play instruments without the pressure of performing, and a place to wind down and de-stress,” Shay told Newcastle LIve.

“I did heaps of research about the impacts that music can have on reducing a person’s cognitive load and I’m also big on not having people adapt to spaces but having spaces adapt to people.”

Shay added that her study regimen of taking breaks to sing, play piano and guitar, and write music helped her productivity while people used to traditional ways of studying might view it as procrastination.

“I thought: ‘I can’t be the only one.’ So I was inspired to create a vibrant space that offers instruments to play and a place to study that creates a sense of belonging and encourages creativity without fear of being judged for a lack of productivity,” she said.

Shay who is also a singing tutor, support worker and vocalist in local band Collidescope, then presented her concept to her course coordinator who ‘loved the idea’.

And after whittling down reams of research into a one-page proposal the concept was sent on to University higher-ups and Shay soon found herself in a Zoom meeting with the Campus Activation Committee.

‘We had the meeting on zoom and there’s little me, a couple of other people and a table full of dudes in suits which was pretty scary,” Shay said.

“I had to give a ten min presentation, and they accepted it on the spot.”

With the concept now approved by the University, work is now being done by the University of Newcastle Students’ Association (UNSA) to find a suitable space to accommodate NUsic which Shay was hopeful would be found in the coming weeks.

In the meantime, Shay is on the lookout for donations of musical instruments, posters, and basically anything that will make the space vibrant and inviting.

“I’m also keen to reach out to local Aboriginal community centres and get some information on the most respectful way to get some traditional instruments in the space.”

If you’re interested in helping bring this great concept to fruition, get in touch via nusic.shay@gmail.com.