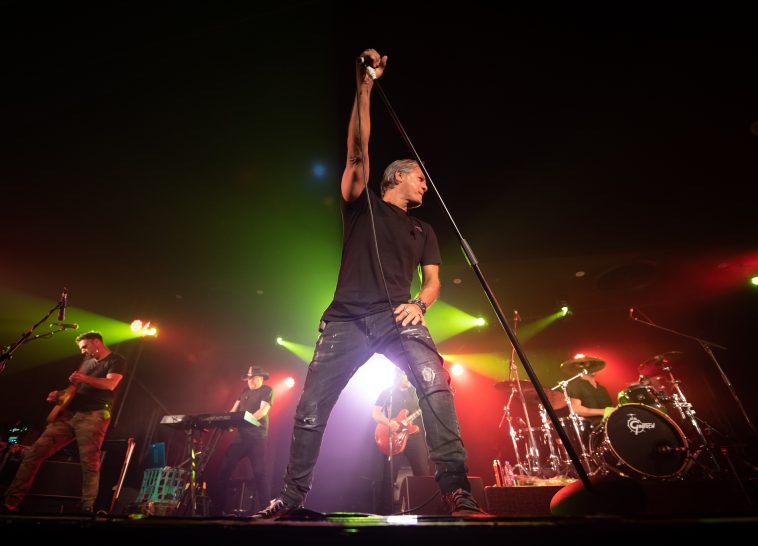 He’s the New Zealand-bred frontman that has one of the most formidable set of pipes in the biz.

And after a recent hit out at the Honeysuckle Hotel, Jon Stevens is coming back to do it all again – this time at Belmont 16s.

The show promises to be an all-killer-no-filler set chock full of Noiseworks hits such as Take Me Back, Touch and Hot Chilli Woman and a hefty selection of some of Jon’s favourite INXS tracks.

Speaking to Newcastle Live, Jon said that he couldn’t wait to return to the Lake Macquarie venue to ‘give the people what they want.’

“For me, gone are the days of trying to be cool onstage,” he said. “Now it’s just about getting up there and having a bloody good time which is what this show is all about.

“It’s really nice that there is still a lot of love for those Noiseworks songs out there and obviously love for INXS is still huge so it’s just really great to be getting out there and putting smiles on people’s faces.”

Following the tragic death of frontman Michael Hutchence in 1997, Jon began fronting INXS on a regular basis and after a red hot performance at the 2000 Sydney Olympics and tours of South America and Europe, Jon officially joined the band in 2002.

He also co-wrote, with Andrew Farriss, and recorded the track I Get Up with the band before they parted ways in 2003.

He said that his time with the Aussie rock icons would be one that forever looked upon fondly, despite coming into the fold after such a tragedy.

“The whole thing felt very natural, and it was such a gift to be able to perform with those guys,” he said.

“I’ve always been a very positive person so in a way I saw my role as helping steer them through this massive blunt force trauma they had suffered.

“About six months before Michael’s death, I also lost my brother to suicide so we were kind of in the same boat – grieving together and healing together.”

Jon, who often tackles INXS fare at his solo shows, added that his explorations into the band’s iconic catalogue had been given a tacit seal of approval from the band itself.

“It’s funny because, the last time I played Belmont, Andrew Farriss turned up, played a couple of songs with us and hung out which was nice,” Jon said.

“After the gig he said to me: ‘The set was great but you need to play more INXS songs.”

Catch the Jon Stevens Noiseworks and INXS Collection show at Belmont 16s on Sunday 15 September. Get your tickets here.