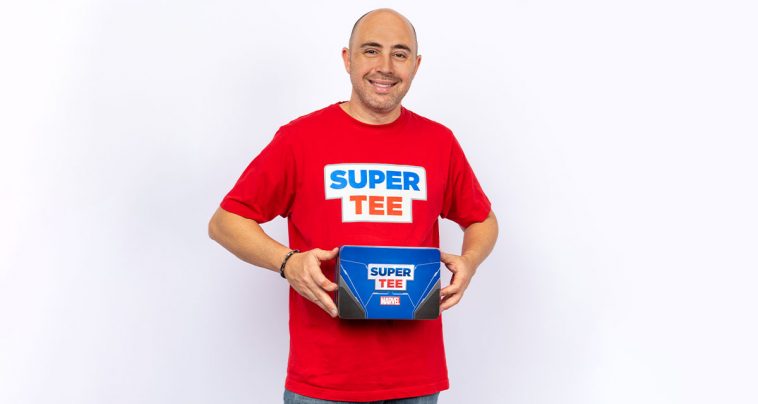 Jason Sotiris, a tradesman whose daughter was diagnosed with cancer at just one-year-old, has created a medical garment for sick children called, Supertee.

When Jason noticed the tubes and drips would become tangled in his daughter’s clothes he set his mind to finding a solution.

The garment he came up with now helps thousands of other children around Australia every year.

“The idea for the Supertee came to me while comforting my daughter Angela who was being treated for a cancer called Langerhans Cell Histiocytosis and I felt helpless not being able to do the simple task of putting clean clothes on her with IV drips, chest monitor cables and central lines making it impossible,” Jason said.

“So far more than 13,000 Supertees have made their way into hospitals around Australia giving already brave children additional courage, but our dream is to help bring out the Captain America and Captain Marvel in all children in hospital.”

Now Jason has turned his attention to ensuring every child that needs a Supertee gets one.

Newcastle Permanent Building Society employees are getting behind the cause by donating their time and over $13,000 to deliver more than 300 Supertee Marvel Edition medical garments to sick children in hospital.

On 10 August, 25 Newcastle Permanent employees will pack the Supertee garments into their individual tins with a hand-written note to help inspire a child and their family.

These Supertees will help children like eight-year-old Abigail Breeze from Newcastle.

“Despite being so young, Abigail was amazing in confronting the fear and uncertainty of hospital stays, but drips and tubes would get in the way of simple tasks like getting dressed, not to mention the dreaded green hospital gowns,” Abigail’s mum, Nicole Breeze, said.

And while Jason has got support form people at the Newcastle Permanent and Hollywood stars Chris Hemsworth and Brie Larson you can still help him reach his goal.

Individuals and businesses wanting to help get Supertee Marvel Edition medical garments to sick children in hospitals can visit supertee.org.au.