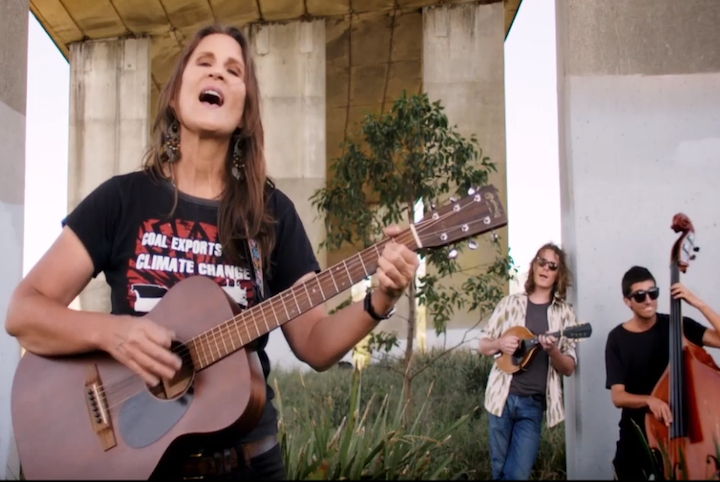 Newcastle songwriter Su Morley, under the moniker of Steel City Sue, has released a video for her stirring Newcastle protest tune Boom Town.

The track is from Steel City Sue’s debut 2018 album of the same name and decries the current state of our fair city, with abandoned buildings dotting the landscape of Hunter Street, and anger over the sale of the Port of Newcastle.

“When they sold off our port and all the land that goes around it. They said the windfall would be spent resuscitating Hunter Street but most went down to Sydney town and just like that they stole the jewel from our crown.“

While lyrically, Sue, an obviously passionate Novocastrian, pulls no punches, musically, the tune is a gorgeously lilting country number, underpinned by an ear-worm of a banjo line.

The video too is no less striking.

Directed by Heidi Lee Douglas, the clip shows Sue visiting various ‘formerly great’ Newcastle locales, and holding up photos of yesteryear next to their current forms.

One such site is the former Palais Royale, which became a KFC back in 2010.

“I can still remember seeing Screamin’ Jay Hawkins there,” Sue reminisces on the track. “Everybody’s parents met there. So much for the old icons of our town.“

While the themes dealt with in the song and clip would be enough to bring a tear to most Novocastrians’ eyes, the clip isn’t without its own sense of hope.

It closes out with a group happily dancing at what looks to be Stockton’s Griffith Park, with the Newcastle skyline in the background.