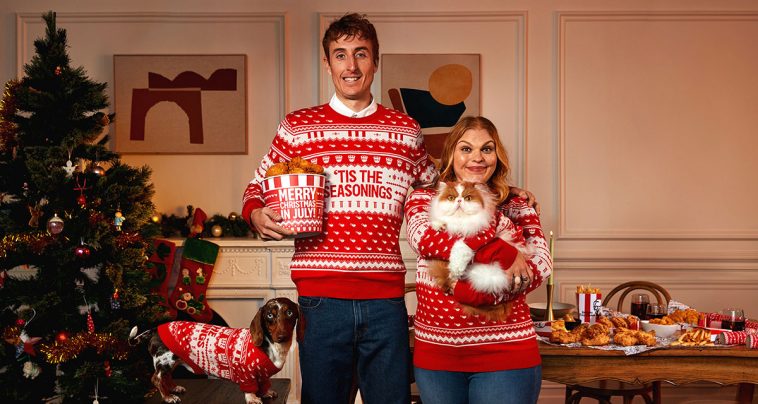 KFC has dropped those limited-edition Christmas in July Jumpers again but this time you can also get one for your four-legged friend.

These bad boys were first released in 2021 and were snapped up like chicken nuggets at a school camp, so if you missed out last time you’re in luck.

Plus, the masters of the fried bird are been working away with Santa’s elves to design and release a Christmas jumper specially designed for your numero uno floof.

The best thing, besides rocking a sick jumper, you’ll be doing a good thing with your dollars too.

KFC will be donating all profits from the jumpers to charity partners like The Black Dog Institute, ReachOut Australia, and Whitelion.

And because the celebration of Christmas isn’t complete without a gut full of food, KFC has also released a decadent yuletide feed you can smash while wearing your new Chrissy jumper.

To celebrate this festive drop, the Colonel is offering free delivery when you order the Christmas in July Feast via the KFC App between Tuesday 12 July and Monday 8 August.

If you’re keen to get your mittens some of these iconic knits you’ll need to head to the KCF Shopify page.