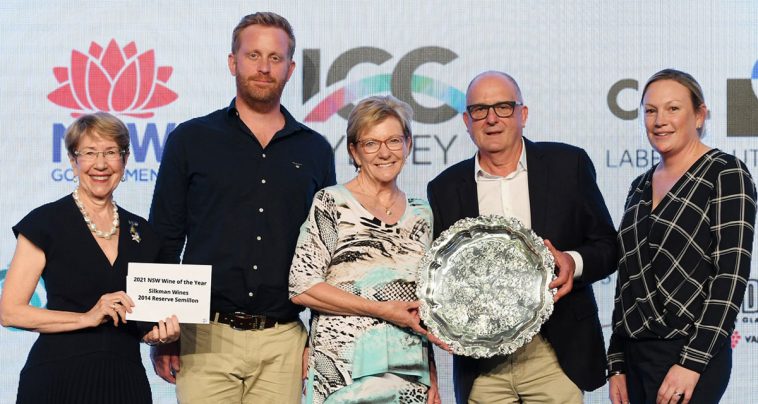 Silkman’s 2014 Reserve Semillon was awarded Best in Show at a ceremony on Friday, 10 December, at the International Convention Centre in Sydney.

“Nothing short of extraordinary and a true marker of the Hunter region as one of the best in the world,” Chair of Judges, Nick Spencer said.

“As a region, we were thrilled to have so many of our wines recognised as gold medal winners at this year’s NSW Wine Awards,” Stuart Hordern, President of the Hunter Valley Wine & Tourism Association said.

“To go on and win a third of the trophies awarded, all from Hunter Valley producers, is an outstanding result and testament to the depth and quality of our wine producers. Special mention and congratulations to Silkman Wines for winning NSW Wine of The Year.”

Since 2013 Liz & Shaun Silkman have been awarded multiple times for their dedication and attention to detail in their wines.

Silkman Wines was named as one of the 10 Best New Wineries in Australia and they won best Semillon at the 2014 NSW Wine Awards, Top Gold at the Hunter Valley Wine Show for their 2014 Reserve Shiraz, and countless other medals around the country. Shaun was nominated as Rising Star of the Year at the 2016 Hunter Legends Awards and Liz was awarded 2016 Hunter Valley Winemaker of the Year, for the second time.

Along with the top prize, Silkman Wines were also awarded the Best Semillon and Best White in Show.