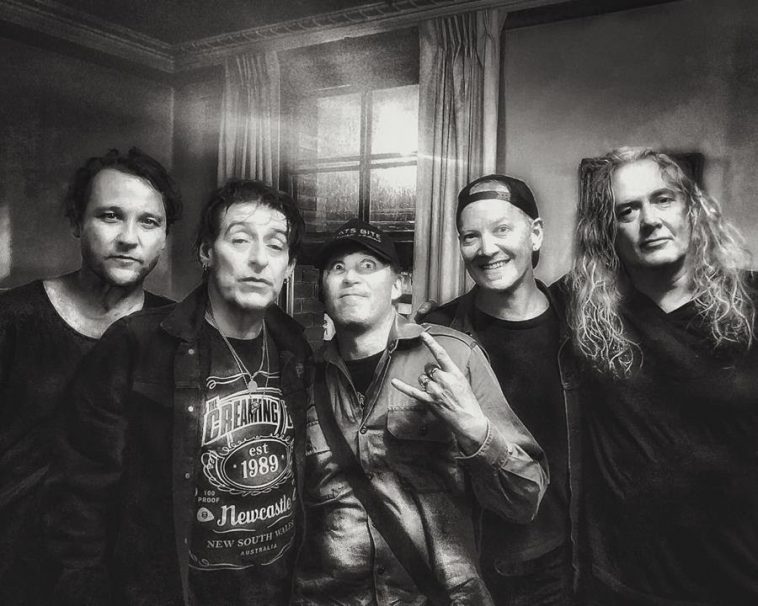 Formidable rock dogs The Screaming Jets have breathed new life into one of their best-loved tracks in the form of the Helping (Washed) Hand – Iso 2020 Mix.

The original track, released almost 30 years ago (if you can believe it) was written by bass player Paul Woseen and has definitely found a place in the current collective psyche.

Frontman Dave. Gleeson said that the band felt the song more than apt as a ‘clarion call’ for the music industry, which has been utterly decimated in the wake of the COVID-19 pandemic.

“It seemed an apt song to do. Just like every other band, act, and performer in the world, The Jets found ourselves having to cancel our tour as well as recording plans,” he said.

“[This version is] five blokes, six cameras and the perfect song to express the current state of our industry.”

The track, which was shared to social media on Tuesday night to a rapturous reception, is the first in a series of ‘quarantine re-recordings’ the band is currently working on with long-time producer Steve James.

Given they are often touted as being one of the hardest working bands in Oz, it comes as no surprise that the Jets aren’t keen to rest on their lockdown laurels.

“In a world where we can’t physically reach out as we need to as performers, hopefully with this song and video we can connect with people as well as expressing the frustration we feel about the lack of support the live music industry is feeling right now,” guitarist Scott Kingman said.

Speaking of not resting on laurels, Dave has definitely been keeping busy with his weekly #StreamingNotScreaming live-streamed gigs with Adeliade musician Crafty.

The stream sees the pair embark on a ramshackle journey of songs, stories, snapshots and the occasional dad joke every Sunday from 3.30pm and is growing in popularity each week.

In fact the Anzac Day iteration which included a moving rendition of Eric Bogle’s And The Band Played Waltzing Matilda was viewed by more than 1000 people across the globe.

‘Gleeso’ is also using the current global situation to rebrand himself as a bit of a fashionista, launching a line of #StreamingNotScreaming ‘iso-wear’ to kick back in as you wait for restrictions to lift.

The range of track pants, hoodies, beanies and stubbie holders is strictly limited and can be found here.